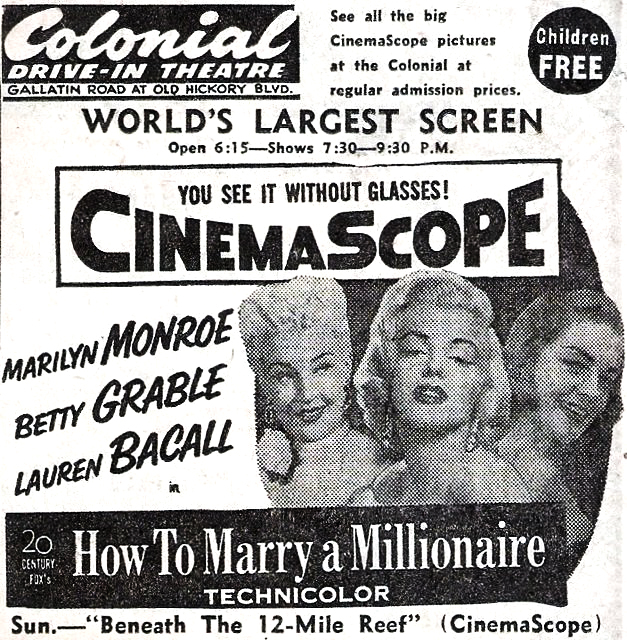 The Colonial Drive-In opened on April 27, 1950. It had a Colonial Revival style facade on the rear of the screen which faced the road, representing a large Southern colonial mansion. The capacity was for 600 cars.

On September 13, 1973, a second screen was added and it was renamed Colonial Twin Drive-In with an increased capacity for 935 cars. It was closed in the late-1960’s.

Could this Drive-in Had a name change? In 1956 in the Motion Picture Almanac there is a Montague Drive-in in Madison that held 810 cars and was owned by C.H.Kurtz.

These were two different drive-ins.A McDonalds is at the site of the Montague Drive-in.Near Madison Square Shopping Center.

There was another Colonial Drive in theater. This was a newer version of the original at Old Hickory Blvd. This was where they moved when they closed that Colonial Drive In at Old Hickory Blvd..The reopened it farther out in the suburbs of Hendersonville TN. It reopened as a twin theater on Center point road as the Colonial Twin Drive In. It thrived until it was floods by the creek that bordered the property and never really recovered. The marquee and crumpled screen is the only remaining evidence of theater there to this day. Before the Army Corp of Engineers dredged the creek and deepened the creek channel there use to be some really fun fishing in the creek there. It had carp,gar, catfish and bass.