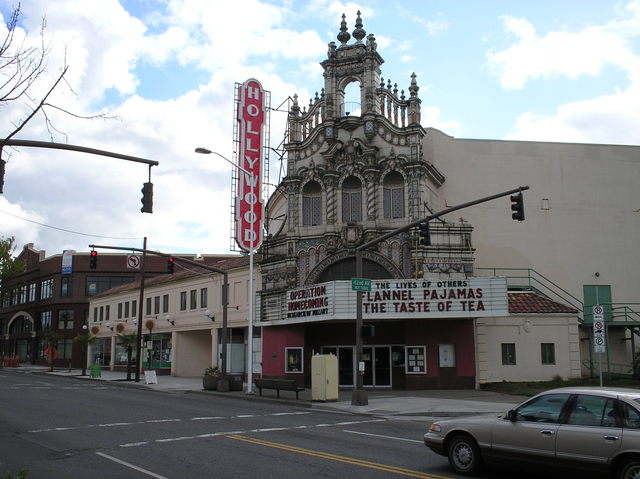 Located along Portland’s Northeast Sandy Boulevard, in the heart of the business district bearing its name, the Hollywood Theatre has provided family entertainment since it opened as a vaudeville theatre on July 17, 1926.

With 1,500 seats, the Hollywood Theatre is one of the most ornate neighborhood theatres in the Pacific Northwest. Its exterior, with a beautiful Byzantine, rococo tower, resembles something to be found on William Randolph Hearst’s San Simeon estate.

Although still standing, the Hollywood Theatre spent the last 30 years quietly slipping into a state of disrepair, operating as a nearly forgotten discount movie house.

In April of 1997, the Oregon Film & Video Foundation purchased the theatre from ACT III Theatres for the purpose of preservation and gradual renovation. The Hollywood Theatre re-opened in November of 1997 and has once again become a vital part of the Hollywood district in which it’s located.

One of my coleagues and I drove non stop from Toledo Ohio in the mid 70’s to deliver the new projection equipment for the triplexing of the theatre. Two sets of “EPRAD” SWORD Systems were installed to accomodate the twinning of the balcony level. The new projectors were designed to provide fully automated operation of the film presention.

Does the main theatre still have its CINERAMA Screen?

Paint and tri-plexing altered the Hollywood so much over the years that to do an authentic restoration of the facility will most likely not happen, given the current owners. This being due to costs of refurbishment, current economic realities in the performance facility demographics and operating costs of Portland and the desired use of the building today. Much like the ex-Paramount, the Hollywood’s elabourate 1920’s charm resides outside of the auditorium side of the building. Given its location, and the costs and labour required for authentic restoration, the Hollywood in many ways is probably gone forever. Only the Bagdad and Elsinore Theatre in Salem approach what could be called “authentic” restorations. The Elsinore was well-preserved over the years before being worked over and the Bagdad was not a terribly ambitious project when it was built. With all due respect, $100,000 in 1927 would have been considered an “economy-priced” theatre, given it’s size. Indeed, the comparably-sized Elsinore and Capitol Theatres in Salem and Portland’s Hollywood Theatre came in with price tags hovering in the $250,000-plus range.

Gary Lacher and Steve Stone wrote a book called The Theatres of Portland which has a number of good photos of the Hollywood—inside and out. Some of us who remember these places from many years ago find the book at once fascinating, but also painful because what does survive in Portland is very little. However, once one realises that these places are usually—no matter what city they are in—titanic projects, then we must be thankful for what little we have left—which I am. At least a few of the more important buildings survive. If economics ever dictate that these places can be restored to their former glory, the foundation and “canvas” upon which to do it are still there.

Excerpt from “Security Signs Revives Historic Theater With New Marquee” which appeared in the October 2015 issue of Signs of the Times.

Hollywood Theatre is an historic theater that was built in downtown Portland’s southeastern section, known as the Hollywood District. This ornate, beautiful theater, located at 4122 NE Sandy Blvd., opened in 1926. There are no known photos of the original marquee; to our knowledge, only a drawing of it exists.

The theater’s management updated the Hollywood’s marquee during the 1970s in an effort to “modernize” the theater and help it compete with mushrooming, multi-screen “cineplex” chains. The marquee remained operational, but deteriorated to the point of ugliness. And, according to Doug Whyte, the Hollywood Theatre Foundation’s executive director, the revised marquee didn’t mesh well with the building. Consequently, they sought a design inspired by the original 1926 marquee. Several streets converge at this location, so the theater enjoys high visibility. However, from a project-management perspective, this presented problems. Also, a new building had been constructed next to the theater, which further complicated matters.

Kevin Hallwyler, Security’s project manager for the job, learned of the marquee revitalization during its early planning stages, and established a relationship with Whyte. Hallwyler’s frequent communication, plus Security’s longstanding local stature, helped our bid be successful.

Thanks to the former Fox Cinerama Hollywood Portland they still show 70mm film prints from time to time and the screen is as little curved. They need to do a fund raiser or extra fee for screen curtains and color lights for the large downstairs cinema.

While having the Hollywood nearby is a real treat (especially for 70mm and 35mm), it does have one significant flaw: the auditorium itself.

Now, my only real gripe with the auditorium is that it lacks a balcony. I’m not sure how the seat count compares to other historic theaters around here, but it certainly feels smaller than them. The original balcony was, of course, converted decades ago into two smaller auditoriums which remain in use, so restoring it is likely unfeasible. Though, considering how crowded the main auditorium can be during 70mm/35mm screenings, the balcony is sorely missed.

The Hollywood Theatre announced that it would close temporarily for the COVID-19 pandemic following its March 13, 2020 shows. The theatre reopened nearly 16 months later just prior to its 95th anniversary on July 2, 2021. It also resumed its 70mm film screenings shortly after reopening.

Here’s a new 4-page 50th anniversary FIDDLER ON THE ROOF retrospective featuring a roadshow playdate chronology and historian Q&A. The Hollywood’s year-long run is mentioned in the piece.