Rhode Center for the Arts

Rhode Center for the Arts (Official) 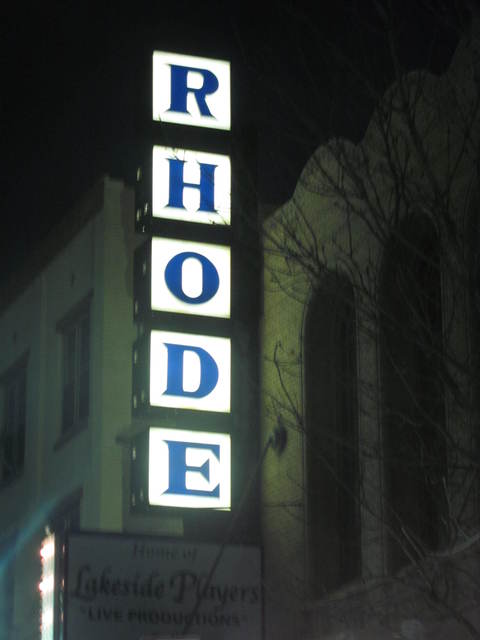 The original Rhode Opera House was opened in 1891 and was destroyed by fire in 1896. A new opera House was built on the site and was screening motion pictures by 1901. In 1924 it was taken over by Saxe Amusements. They demolished the theatre in 1926.

In 1927 they built the Gateway Theatre on the site, which opened on December 29, 1927 with Bebe Daniels in “She’s a Sheik”. It was equipped with a Barton theatre organ. The theatre had 1,800-seats. In 1963 Standard Theatres leased the theatre and it was renamed Lake Theatre, reopening on April 28, 1963 with Jackie Gleeson in “Papa’s Delicate Condition”. On March 12, 1976 it was twinned and renamed Lake 1 & 2. It closed in 1984. From 1988 it became home to the Lakeside Players, a community theater group. In 1989, they puchased the building and it was re-named Rhode Opera House.

Does anyone have any origional photos of the Barton theatre pipe organ console in this theatre? Or any other information about the instrument? I believe I have the console.

Carlton, I think saw a picture of that console last week! It was very exciting to see as I Always assumed that old Barton console was lost to a scrap yard. Its nice to see it still out there!

This article and pictures are WONDERFUL!! My daughter just finished the production of “The best Christmas Pageant ever”, I was a backstage volunteer – and for the 2 months I spent in this wonderful building, I fell in love. It’s so beautiful. I even enjoyed the “spooky” tales of ghosts and hauntings that are associated with it as well.

“We’re not in Kansas anymore” is a phrase that slipped into our vernacular in 1939, along with a number of other gems from the Metro-Goldwyn-Mayer movie, “The Wizard of Oz.”

The phrase could have just as well been “We’re not in Kenosha anymore,” as Kenosha was one of two locales that were the first in the world to show the movie on the big screen.

The film was shown to the public on Friday, Aug. 11, 1939, right here at The Gateway Theater (now known as the Rhode Center for the Arts) in Kenosha, and at the Cape Cinema on Cape Cod in Dennis, Mass.

You heard right. Forget Oconomowoc, who has claimed that honor for more than 30 years — it showed the film the day after we did in Kenosha.

(For the record, the movie was shown at the Strand Theatre in Oconomowoc and at the Venetian Theatre in Racine on Aug. 12.)

For Joe Cardamone, the stage and music director of Lakeside Players’ production of the “The Wizard of Oz” on stage this month at the Rhode, it’s an exciting little piece of trivia.

“It’s sort of odd to think that it would have played at some of these smaller venues before opening in a big city,” Cardamone said. “To think that it not only played in Kenosha first, but at this very theater.”

Newspaper advertisements show that as of Aug. 9, Gateway Theater manager T.R. Reilly planned on opening the film Saturday, Aug. 12, but the Aug. 10 ad announced the Wizard would be shown “Tomorrow.”

The Kenosha crowds got their first glimpse of the yellow brick road at the Friday matinee.

Why did Reilly jump the gun?

“They may have gotten the print early; they may have been doing lousy business with the films they had showing in the latter part of that week,” suggested John Fricke, one of the authors of “Oz: The Official 50th Anniversary Pictorial History,” in a 1991 interview.

Or it could have been because Aug. 11 was the last day a patron could obtain Volume One of the Standard American Encyclopedia, the promotion offered at the Gateway at that time.

Theater promotions of the day enticed people back to the movies to collect a set of dishes — one piece per admission — and other household items.

If people didn’t get that first volume of this encyclopedia, chances are they wouldn’t be interested in the remaining 14 volumes. And the theater owner might have been stuck with the books.

The Kenosha Evening News in conjunction with the theater ran a coloring contest depicting Oz characters, so the excitement for the film was building.

“The Wizard of Oz” played at the Gateway for six days. After just four days of showing, the theater claimed that 8,000 patrons had seen the feature.

Showing the film at all these small-town theater venues does seem a bit weird when you consider that the movie had its West Coast premiere in Hollywood at Grauman’s Chinese Theater on Aug. 15, and it opened in New York two days later on Aug. 17.

But we shouldn’t be too hard on Oconomowoc.

The movie was advertised there as a world premiere, as the Milwaukee film distributor advised the Strand owners Harley and Ruth Huebner that they were the first to exhibit the film.

Someone just forgot to tell that to Mr. Reilly.

If there isn’t room for the main column and at least two photos, don’t run this sidebar. It’s interesting, but not essential. DG

Oddly enough, MGM lost nearly $1 million on the first release of “The Wizard of Oz.” The production, distribution, prints and advertising costs did not offset the gross of $3,335,000 the picture took in.

Author and “Wizard of Oz” expert John Fricke explained that there were three reasons for this:

— The glut of incoming film product. A picture couldn’t be held over for more than a day or two because Hollywood was cranking out too many films.

— Even though the theaters were filled for each showing, as much as half of the audience were children who were admitted at cut rate prices.

“Workmen began a fenestral facelift Friday at the Rhode Center of the Arts, with removal of the steel frames and glass panes from the arched second-floor windows of the vintage theater and opera house overlooking 56th Street.

Lowell Bros. Construction Co., of Kenosha, is doing the removal and is scheduled to install new, updated windows within the next two weeks.

Steve Mattner, a Rhode board member, said the new windows not only will be more energy efficient, but will “show off” to passersby the four original crystal chandeliers suspended from the ceiling of the ornate lobby inside the downtown Kenosha landmark.

Now home to The Lakeside Players, the original Rhode Opera House was built in 1891 but destroyed by fire in 1896, although it was rebuilt the same year.

The second building was razed by Milwaukee entertainment giants the Saxe Brothers in 1926 to make way for the “modern” building costing a half million dollars — more than $6.5 million in today’s money — and which opened in 1927 as the Gateway Theater.

The third building to stand on the site, the Gateway Theater was leased to another operator in 1963, who renamed it the Lake Theater, which underwent a building makeover in 1976 before closing 12 years later.

In 1987, the Kenosha Lakeshore Business Improvement District (now the Downtown BID) accepted the Rhode family’s request to take title to the property and renamed it once again the Rhode Opera House. In 1989, Lakeside Players, a community theater group, bought the building for the cost of improvements.

In July 2004, with the opening of the Pollard Gallery in the building, which also houses another art gallery in the second floor Madrigrano Mezzanine — Rhode Opera House was renamed Rhode Center for the Arts."

After those windows were replaced now work has proceeded on relighting the front chandelier which has been pretty much hidden from view for years and left dark. The plan from what I hear is to have it on a sensor so it turns on at night, lighting the center front window through out the night. Currently a lone bulb is in it and turns on with the other lights. Not heard a timeline for when this will occur. There has been other small improvements occurring backstage such as dressing room improvements/painting and improving the backstage bathrooms.

The GATEWAY Theatre’s 90th Anniversary last Friday passed without a word of observance from the current occupants … not a good sign, in my opinion.

“The Wizard of Oz” world-premiered at the GATEWAY Theatre on this night eighty years ago, and again, there’s been no observance of that history in any manner. 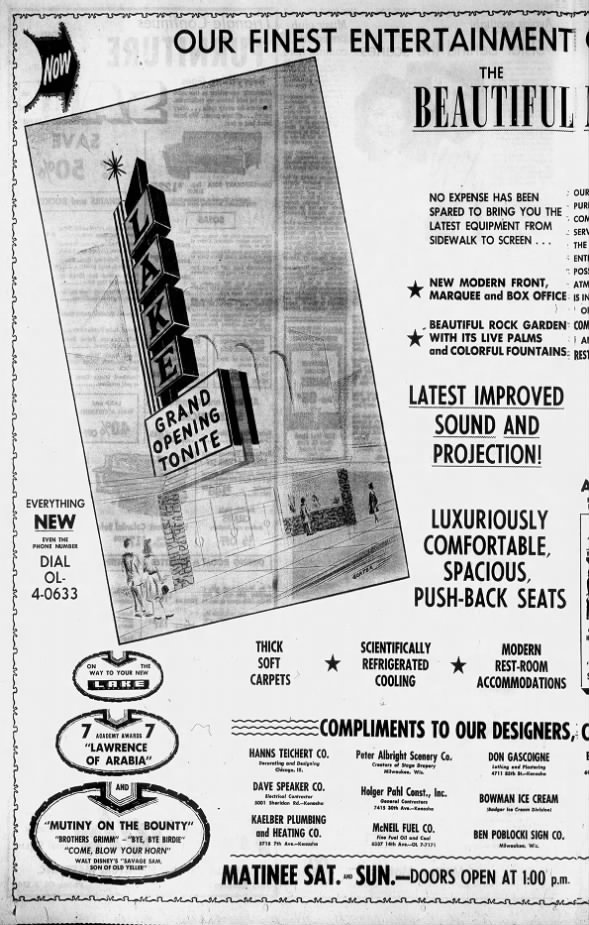