The Odeon Brantford was built for the Odeon Theatres (Canada) Ltd. chain, a subsidiary of the British based Rank Organisation. It opened on December 17, 1948 with Stewart Granger in “Blanche Fury”. Plans were drawn by architect Jay I. English, but he had died before the theatre was built and it was completed by the Rank Organisation’s British architect Leslie H. Kemp.

The plain brick facade was relieved on the left hand side by stone slats, and on the right hand side over the entrance by the large vertical name sign.

Inside the auditorium, seating was provided in stalls and balcony levels. The side-walls had a fluting effect all the way along, which was cut away in a curve beside the proscenium. In 1979, fire damaged the theatre and the auditorium was twinned as part of the refurbishment.

Last operated by Cineplex Odeon, it was closed on January 21, 1999. It lay empty and unused for several years until 2003, when it was converted into the Laurier Mowhawk College, with four lecture halls.

Cinema was originally a single screen. Was split down the center and converted to 2 screens in 1979 after a fire damaged the theater. 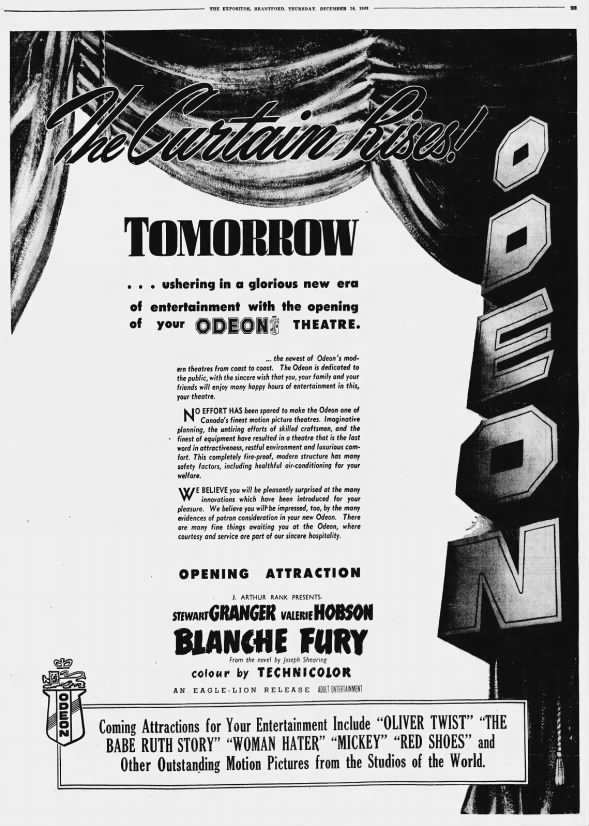