Previously operated by: Stewart and Everett 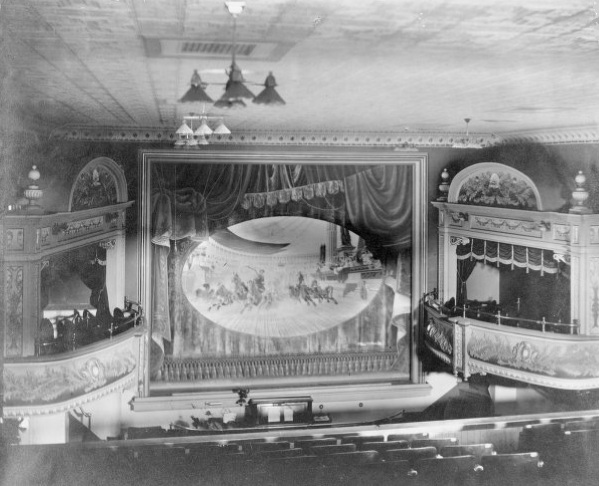 Opened on April 11, 1911 as the Athens Theatre with 572 seats. By 1929 it had been renamed Show Shop Theatre and by 1943, it was the Kehoe Theatre, a name which lasted until at least 1950. The Tryon Theatre was owned and operated under Charlotte-based Stewart and Everett Theatres until its closing in the late-1970’s.

Since renovations in 1980, it is now operated by the New Bern Civic Theatre.

I lived in downtown New Bern twenty years ago when the diagonal image of the “restored” facade was painted on the (then) Saax Bradbury Playhouse. I attended a performance of “A Funny Thing Happened on the Way to the Forum” at this theater in 1991 and nothing had been done to the facade since the removal of the circa-1940 front and marquee back in the late 1980s. They should have left the modern facade up until they had the funds to fully restore the original Athens facade. Still, at least the New Bern Civic Theatre is still operating; the Turnage Theater in nearby Washington is closed and about to go on the auction block.

The Athens Theatre briefly had a tiny Wurlitzer pipe organ. Wurlitzer’s records show a Style 105 Special, opus 1371, 2 manuals, 3 ranks, with a curved console was installed in June 1926, but the organ was moved to a theatre in Maryland in September 1927. The theatre’s website says the hall was equipped for sound pictures in 1929 so the short life of the organ there is something of a mystery.

This was operated by the now defunct Stewart & Everett Theater corp from some time in the late 50s until 1979.

After Southgate Cinemas and the Rocking Chair Cinema on Neuse Blvd. were opened, the “Tryon Theatre” mostly played martial arts and blaxploitation films, with X rated late night films on Fridays and Saturdays.

Its last hurrah was a long run of Star Wars after the Rocking Chair Cinema (same owner) was tied down to honoring its contract to Fox to show the forgettable Other Side of Midnight.

With its lease expiring, S&E Cinemas chose not to re-up and removed their equipment. It was purchased sometime later by the New Bern Civic Theater company for live productions.

This is where “Star Wars” played first-run in New Bern? Apparently the Neuse Village Cinema was still single-screen then, as Fox forced S&E to play a lesser film at the better cinema. That move by Fox sounds like a booking practice that was abolished when the Paramount decree was imposed in 1948.

New Bern resident and writer, Nicholas Sparks is holding a red carpet event at this theatre in the near future.

Hello, My name is Lynda Blankenship and I am the Executive Director of a 1915 movie theatre in Massillon, Ohio. I am in New Bern and saw your restoration work and was wondering if I might be of help. We have just completed a $400,000 restoration of part of our building, we run a complete theatre with Live Shows, a year long classic film series on Sat. and Sun and community events. We have found very interesting funding channels and I book all our own films. I do the PR and all the community speaking and front of house. I am enjoying my visit to your lovely historic town and am thinking of purchasing a 2nd home in the downtown area. I would love to offer any help you may need. I have been consulting theaters trying to come back on line. I wish you the best of luck and hope to be able to assist in some way. Lynda Blankenship, The Lions Lincoln Theatre, Massillon, Ohio

Ms. Blankenship, Cinema Treasures is not affiliated in any way with the New Bern Civic Theatre. If you wish to contact that organization directly, you can do so from their web site. Their “Contact” link can be found by hovering your cursor over the “Giving” link on their main page.

Cinema Treasures also has a page for the Lions Lincoln Theatre, but so far it has received no comments. Perhaps you would like to provide the first?

This one advertised as the Show Shop Theatre in 1929.