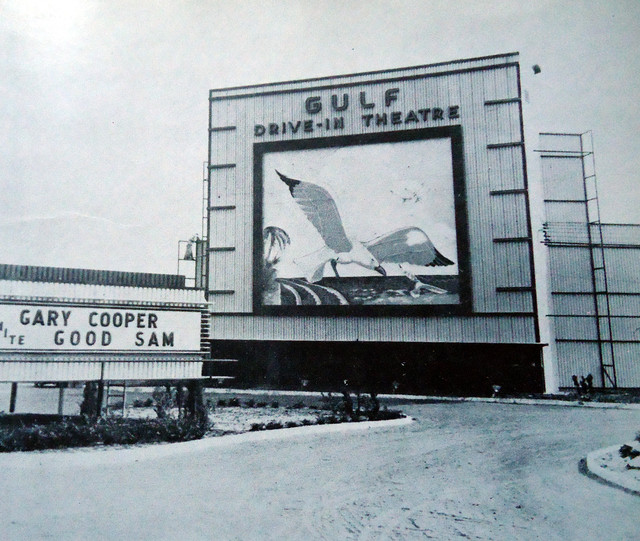 Opened in January 1949, the Gulf Drive-In was located in what at that time were the outskirts of Corpus Christi. The rear of the screen had a large sea-gull mural. Operated by Claude Ezell & Associates Inc., the Gulf Drive-In had a capacity for 750 cars. From 1968 to its closing in 1978 it screen Spanish language movies.

The Gulf opened Friday Jan 21, 1949 by U&E (Underwood & Ezell) as a 500 car capacity, $225,000 drive-in. It operated for the first year or so under the U&E banner eventually shifting to the Ezell & Assoc. banner. WG Underwood had already passed in June of 1948. The first feature shown was “A Date With Judy” starring Wallace Beery.

The theater was upgraded in the spring of 1952 to a 750 car capacity. The mural was changed from a sea gull to a mermaid at that time. At some point in the mid 50s Claude Ezell sold out to the Corpus Christi Theaters / Robb-Rowley / Rowley United / United Artists circuit who continued to operate it until 1968 when they leased it to T. “Bob” Cuellar who began to operate The Gulf drive-in, The Buccaneer drive-in and The Tower theater as Spanish language theaters under the same banner.

thanks Yakima I love looking at the old ads.

Repaired speakers as a teenager at the Gulf. Had stereo car speakers for movies in stereo!

For the 1952 season, the seagull mural was replaced by a mermaid on the Gulf tower.