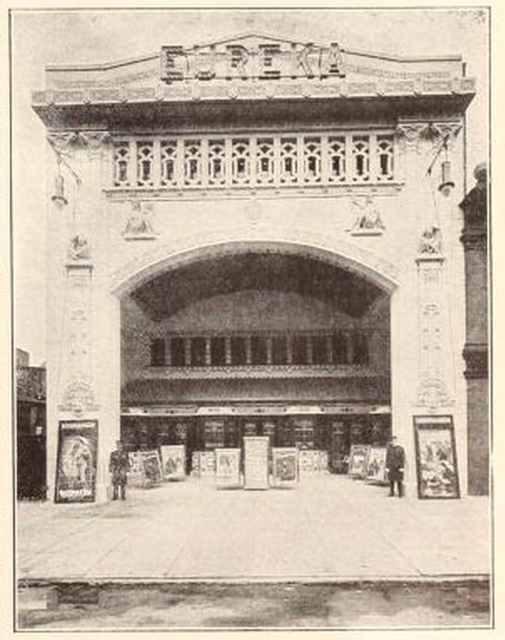 Located on Market Street at 40th Street. The Eureka Theatre was opened in 1913. It had a large arched entrance in white terra-cotta, and contained small decoration reliefs of mother & child. In April 1952 it was renamed Fine Arts Theatre screening foreign movies, but this was not a success and it closed in September 1952. It reopened as the Eureka Theatre in February 1953. It was closed in the 1950’s and became a furniture store. It was demolished in the 1970’s and a high-rise which is now University Square retirement home was built on the site.

In 1915, The Architectural Record published this article about movie theaters, which included both a photo and a floor plan of the Eureka Theatre, as well as Stearns & Castor’s earlier Victoria Theatre (scroll up from the article title to see the photo of the Eureka, down to see the other illustrations.)

The Eureka is visible at the top right of this picture from 1949. This was during construction of a subway tunnel to replace the elevated in this area.

This page says that the Eureka was converted into a furniture store in the 1950s and gives its address as 3941 Market Street.

The Eureka’s name was changed to the Fine Arts in April 1952 and the theater adopted a foreign film policy. Apparently this was not successful as advertising for the house stopped in September. The theater was open again in February 1953 (probably four-walled) as a venue for the “sex hygiene” picture “Street Corner.”