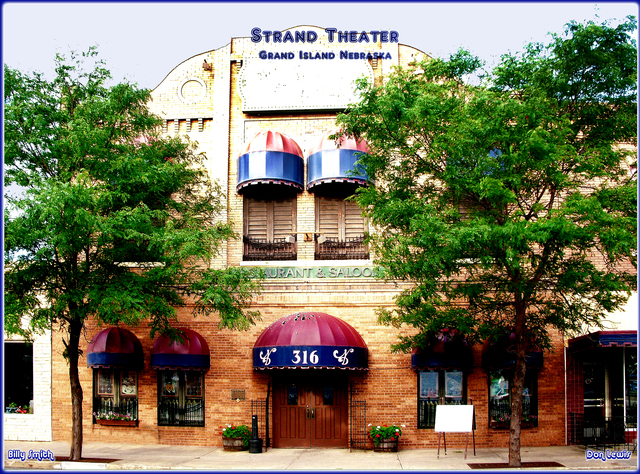 Opened as the Michelson Theater on May 18, 1908. It was renamed Strand Theatre on October 27, 1920. It was closed on April 27, 1924. Two years later it was converted into a grocery store. It is now a bar/restaurant named Kinkaider.

I see that Grand Island had a Capitol theatre owned by TRI-STATE Theatre Corp. Located in Paramount Building in Des Monies.Iowa. Can’t find a Strand.Wonder if it had closed by 1956? Wish I could be of more help.

The Drive-in there was a TRI-State Theatre,Bet the Strand was too.

From 2010 a photo of the Strand Theater building in Grand Island.

The Strand Theatre aka Michelson Theatre was no longer listed after 1927.

The 1927 FDY lists the Capitol as under construction, so it might have replaced the Strand.

A book called History of Hall County, Nebraska (Google Books scan,) published in 1920, said that the Michelson Theatre had been built “…about eleven years ago….”

An article in The Grand Island Independent of July 1, 2000, said that the Michelson was renovated and renamed the Strand in 1921. It also said the house had 450 seats and featured a balcony. They must have been squeezed tight, because the building isn’t very big, especially considering that the Michelson presented vaudeville as well as movies.

Fred H. Michelson began construction of his new theater in 1907 in downtown Grand Island. The Michelson launched on May 18, 1908 with live acts and motion pictures. The Strand replaced the Michelson on October 27, 1920 with its new Bartola Organ played by B.G. Cowham and playing Cecil B. DeMille’s “Something to Think About.” Dorothy Root Gibbs succeeded him playing the Bartola. The Strand ended its operations on April 27, 1924 with Gaston Glass in “After the Ball.” After unsuccessfully finding a new operator, the venue was retrofitted in 1926 and 1927 for an L.J. Skaggs Grocery Store.