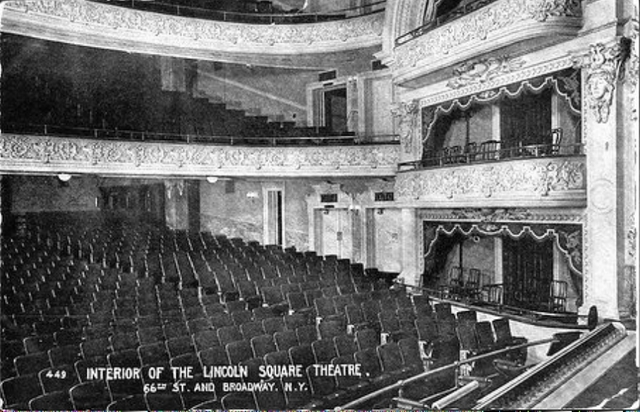 Listed as the Lincoln Square Theatre in the American Motion Picture Directory 1914-1915. Ornate inside, as were most Loew’s theatres in their heydey, it presented movies & vaudeville.

A midnight blaze destroyed the arcade and six story office structure which fronted the theatre on January 30, 1931. The theatre had just emptied moments before. The auditorium was smoke damaged and repairs were carried out, with the Loew’s Lincoln Square Theatre reopening September 4, 1931 with a movies only policy.

The Julliard School opened on the site in 1969.

A December 1951 article on the New York Times says it was already a CBS studio so that may be the year it stopped showing films.

Nice find. I have only seen photos of this place when it is on fire.

It should be noted that the site currently includes a well known performance space in Alice Tully Hall, which recently underwent an ambitous redesign and renovation that was completed in 2009.

The Marcus Loew plaque from this theater is currently up for auction on ebay, item number 271204780383. the plaque apparently survived the transformation of the building into CBS Studio 60.

Programs that originated from CBS Studio 60 included “I’ll Buy That,” “Double or Nothing,” “It’s Magic with Paul Tripp,” and “The Robert Q. Lewis Show.”

Sounds like two theatres are being discussed here – the one that was destroyed by fire in 1931 and another being used as a CBS Studio in the 1950s.

From the various pictures it looks like the shell of the building survived and a new auditorium build behind the middle section which served as the studio.

This was definitely demolished altogether by the mid 1960s when the Lincoln Center building housing Alice Tully Hall and the Julliard School was built.

There don’t seem to be any photos of the theater in the ad. All of them seem to be of the Loew’s destroyed in ‘31.