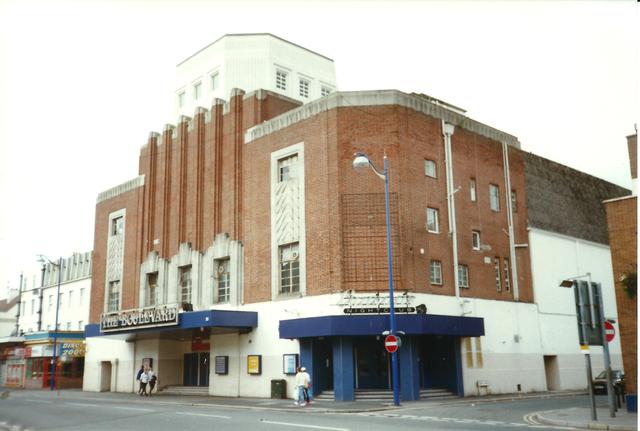 Located in the Stonehouse section in the west of the city centre. Built on the site of the 1,500-seat Andrews New Picture Palace, which had opened in 1910, and was demolished in 1930. The Gaumont Palace was opened on 16th November 1931 with Jack Hulbert in "The Ghost Train" and Sydney Howard in "Almost a Divorce".

The imposing brick building had a white stone tower feature in the central section above the entrance. Seating inside the auditorium was provided for 1,462 in the stalls and 790 in the circle. It was re-named Gaumont in 1937.

The Gaumont was closed on 2nd December 1961 for sub-division, with a dance hall occupying the former stalls area, and a 1,043-seat cinema in the former circle area, which had been extended forward. This opened as the Odeon on 10th September 1962, a day after the town’s previous Odeon on Frankfort Street had closed.

The Odeon continued until closing on 9th April 1980, and in December 1980, it was converted into a roller disco in the former stalls area. From 1987, it became a nightclub and rock music venue, last known as ‘The Boulevard’ the building then stood empty and unused. I believe the former circle area containing the Odeon cinema remained closed and unused during this time.

In the summer of 2013, it was converted into a religious broadcast studio.

It is currently on the Buildings at Risk list and is part of the local Conservation Area. In June 2021 it was announced that new owners had taken over the building with plans to convert it into an entertainment centre which will also be programmed as a concert and live performance venue. Renovations began in May 2022.

There is some additional information about this theatre here.

The 1962 conversion was done at the same time as the Odeon Haymarket (London). Many items, such as seating used identical design and fabrics. The projection rooms and equipment were also similar. One of the last Victoria 10 installations

it is not exactly a church. it is being renovated by a religious based tv network to become part of their broadcast locations. because it is basically being gutted to what complete degree i do not know. i was concerned a bit about any historically significant interior architectural artifacts or original design elements. does anybody know what was there and are there any restrictions. i am glad to know it is contracted for use for a long time but i am such a proponent of historic renovation.

The building is currently open for the public to view an art installation. I went in to explore the remains. In the circle foyer the ceiling decoration has largely survived. In the auditorium the dome which survived destruction in 1962 is still in place. A decorative grille of pointed arches above the proscenium is still there and floors and stairs from the 1930s have been uncovered. At the back of the stalls some of the original steel girders have been revealed. Most of the stepped circle has survived with timber battens inset into the concrete to screw down the seat stanchions. I will be going in again and photos will follow.

I have finally got round to adding a few photos from last year’s visit.

TV news coverage from 196,1 The closing of The Gaumont Palace prior to conversion of the building to Ballroom and smaller Cinema. With Manager Mr Edwards and Projectionist Mr Leacey.

On Tuesday 10th May 2022 I was fortunate to be able to meet up with Nichola Cooke, of Nudge Community Builders, the new owners (in association with transformation specialists Eat Work Art), for a tour of the former Gaumont/Odeon. As can be seen from my photographs, an immense amount of work is required, but Nudge are contemplating retaining the horizontal sub-division and installing commercial units in the former stalls, while adapting the former circle as an entertainment venue. This should provide much needed regular rental income to sit alongside the more occasional nature of the events upstairs. On the plus side, I gather that the building is basically sound. I wish Nudge well in their bid to not only revitalise the Gaumont/Odeon, but also breathe new life into the Union Street area.