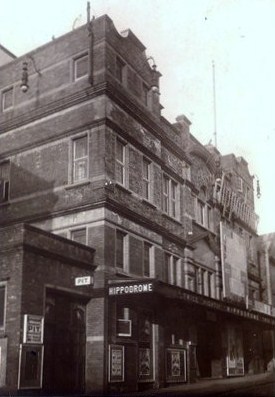 Located on the corner of Prince’s Street and Granby Street in the Devonport district of Plymouth. The Hippodrome Theatre was opened on 14th September 1908 with a review “Neighbours”, and was designed as a variety theatre by noted theatre architect Bertie Crewe. It had a wide facade, which was three storey’s high, containing many windows, and had a pediment over the entrance. The Hippodrome Theatre was screening films as part of the variety programme from January 1910.

The Hippodrome Theatre was closed as a live theatre on 1st June 1929, with a bill headed by Layton & Johnson. The theatre was enlarged to 2,000 seats, to the plans of architectural firm Marshall & Tweedy, and was converted into a cinema. A projection room was built in the roof of the building, and it opened on 23rd December 1929 with Charles King in "Broadway Melody", with Ted Coleman and His Waldorf Band on stage, and also on screen “Movietone News” .

By 1937 it had been taken over by the County Cinemas chain, and in September 1939 they were taken over by the Oscar Deutsch chain of Odeon Theatres Ltd. On 23rd April 1941, the Hippodrome Cinema received extensive damage caused by German bombs, and it never re-opened. In March 1943, the ruined building was owned by Odeon Theatres Ltd. The site was cleared in March 1958 and sold to the Council and the Salvation Army built Red Shield House on the land.