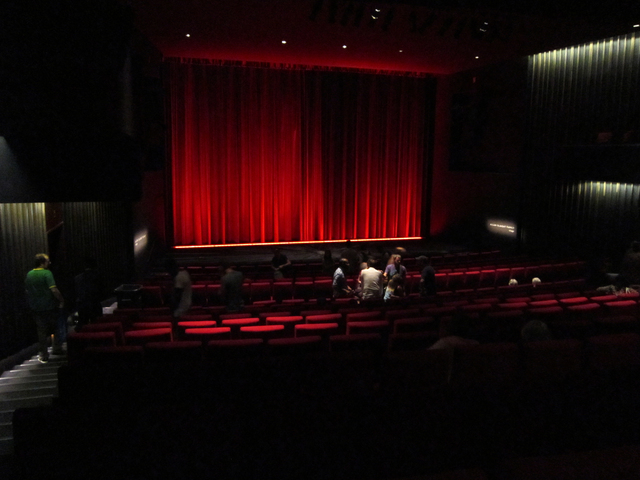 Purpose built for the Toronto International Film Festival, the TIFF Bell Lightbox will be open all year round. Designed by architectural firm KPMB Architects, it has 5 auditoriums, with a total seating exceeding 1,300. Also included are two galleries, three learning studios, a center for students & scholars, and a restaurant.

What other theaters in Canada can show 70mm?

The main floor has the gift shop, an exhibition hall (currently Tim Burton, the last exhibition coordinated with TIFF’s Essential 100 Films), box office and Canteen (excellent place to grab a quick bite). The second floor has Luna (a sit down restaurant), Theaters 1, 2, and 3 (I’ve been in 1 and 3 – both screens seemed a bit higher than the could have been but otherwise flawless sound and design, I think 3 was a reel to reel house), and a snack bar. The third floor has theaters 4 and 5, classrooms and offices.

Upon opening 4 and 5 were used for exhibitions, including 8 ½ Screens, an instillation by Atom Egoyan in which the seating area was draped with white screens and the projector (placed on the stage) projected images from 8 ½ directly onto the screens.

I’m hoping at some point in my academic career to explore the resources they have for film scholars, it’s also worth noting this is in the same neighborhood as the National Film Board’s Toronto Mediateque.

Theatre 1 can not only show 70mm; it shall be doing so soon, including “2001, A Space Odyssey,” “Lawrence of Arabia,” and “Playtime.” I just posted a new item about it; it should appear in a few days.

Chris, Beat me to it, I was going to add those 3 movies to Theater News.

I know that Museum of Civilization, in Gatineau, Quebec can run 70mm because they had a 70mm festival this past September (see here: http://www.in70mm.com/news/2010/canada/index.htm)) Te Cinesphere. I would also bet the Cinesphere on Toronto’s lakefront can (they used to run 70mm fairly regularly).

The theatre at the Ontario Science Centre was equipped with Philips 35/70mm projection equipment. Now whether or not this is still the case I don’t know. I remember seeing the 70mm Todd-AO production of Cleopatra there years ago when film critic Gerald Pratley ran the Ontario Film Theatre at that location. The only other 70mm film I saw at the Science Centre was a special print of the early 50’s 3-D thriller House of Wax. The left and right hand 1.37 images were printed side by side onto the wide 70mm frame. Gerald and I experimented with the special projection lenses and aperture plates and finally managed to get a perfect stereoscopic image on the screen. Gerald, a normally reserved man, was elated when he saw what well projected 3-D could look like. The realistic looking images we saw on the screen that day sure beat the pants off some of the recent flat films that have been converted to 3-D such as Alice in Wonderland and Clash of the Titans.

This webpage has several pictures of the interior spaces of the TIFF Bell Lightbox; one is of Cinema 1, which is the largest and the one which is 70mm capable: View link