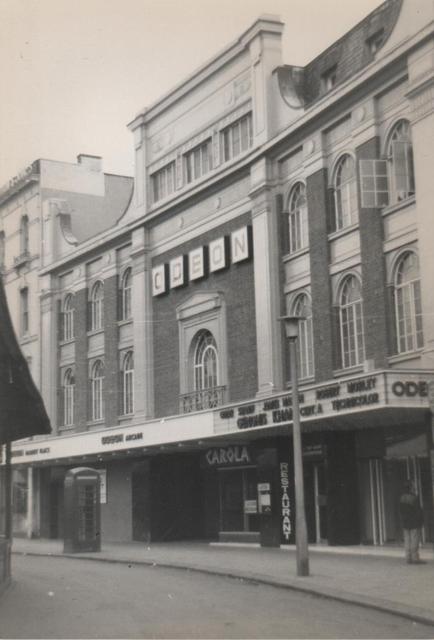 The City Cinema was opened on 3rd November 1924 with J. Warren Kerrigan in "The Covered Wagon". Designed by the London based architectural firm Burdwood & Mitchell, it had a wide facade, facing into the Market Place. Seating was provided for 2,200 in stalls and circle levels. Initially it was equipped with an Apollo organ, and a cafe was another facility that this ‘de-luxe’ cinema boasted. It was a ‘reverse’ cinema, with the audience entering the auditorium at the screen end. (The Picture House on Granby Street was also a ‘reverse’ cinema).

On 4th November 1929, it was taken over by the Gaumont British Theatres/Provincial Cinematograph Theatres(PCT) chain. A Wurlitzer 2Manual/9Ranks organ replaced the Apollo organ, and was opened by organist Leslie James. This Wurlitzer organ had originally been intended for the Marlborough Theatre, Holloway, London.

The City Cinema was re-named Gaumont in 1948. After becoming part of the Rank Organisation chain, it was closed on 11th April 1964. The auditorium was demolished (the organ was saved, having been removed from the building in 1957, and after a number of years in private hands, was installed in the Summerland Entertainment Complex in Douglas, Isle of Man).

A new cinema was built behind the original façade and foyer/restaurant areas. The ground floor was a shopping arcade, and the 822 Odeon Market Place cinema was upstairs on the 1st floor, and opened on 12th October 1964 with Sean Connery in “Goldfinger”. It had a curtained auditorium and stadium seating. It was equipped for 70mm presentations on the curved screen which measured 45 feet wide by 26 feet high, and became the ‘Roadshow’ cinema for the city of Leicester. "The Sound of Music" enjoyed a two years run. The Odeon Market Place still retained its restaurant, now named the Carola Restaurant.

The Odeon Market Place was closed by the Rank Organisation on 31st May 1975. It was taken over by an independent operator and was re-named Liberty Cinema, screening ‘Bollywood’ films. This was a short lived venture, and in 1987, the interior was gutted and it was converted into a Cascade Bingo Club and amusement arcade. These were eventually closed. In September 2014, plans were proposed to convert the former cinema into student flats, retaining the façade and the Odeon Shopping Arcade in the former stalls.

The former City Cinema/Gaumont/Odeon, photographed in June 2009;
View link
In May 2009:
View link

Details and photographs of the Wurlitzer organ which was installed in the City Cinema:
http://www.ukwurlitzer.co.cc/2081.html

My gran used to take me there for a treat. A very smart cinema. They used to show films for a prolonged period I remember.

Recent perusal articles in the Leicester Illustrated Chronicle on The British Newspaper Archive throws more light on the City/Gaumont’s conversion. It was the original cinema that was ‘back to front’ with entry at the screen end. The new Odeon was reversed with entry at the back in the conventional manner. The cinema was originally scheduled to open on September 21st with Cleopatra in 70mm, but this was postponed and, as stated , the cinema opened on October 12th with a normal continuous performance non bookable run of Goldfinger (in standard wide screen and mono sound). This ran for eight weeks and after a couple of weeks of the two previous Bond films, The Odeon, Market Place finally began its roadshow career on December 20th with Cleopatra in 70mm.