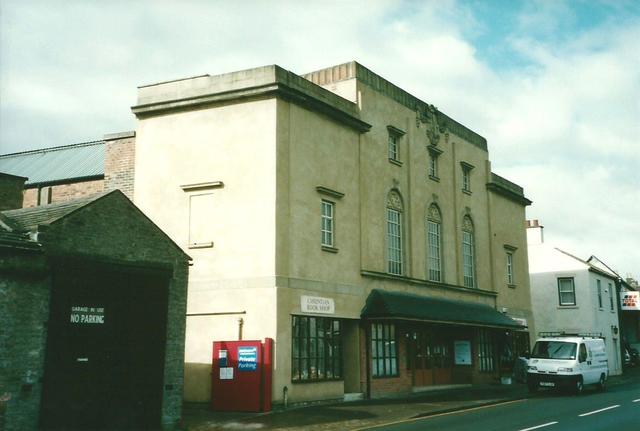 The historic and beautiful town of Richmond, North Yorkshire, acquired a suitably plush cinema called the Zetland Cinema which opened 27th October 1937 with Paul Robeson in “Song of Freedom”.

The facade is classically designed with Georgian style windows at 1st and 2nd floor level, a fluted pediment running around the top and a handsome crest in the raised central portion. A canopy once existed but this and the ground floor has been extensively altered. The upper levels have been very recently, and attractively, restored.

Inside there is a medium sized Art Deco style foyer, with all major details intact. From here doors lead to the lower part of the stadium style auditorium whilst stairs at the side lead up to the rear raised part of the seating.

There is a deep recess in the ceiling containing the vertical ventilation ducts and, originally, concealed lighting and a Holophane lighting system. Ornamental metal grilles remain above exit doors on either side of the stage, which has rectangular opening 40 feet wide in front of a 21 feet deep stage. There were two dressing rooms. From December 1956 it was operated by the Star Cinemas chain and the cinema closed on 16th April 1983.

It was sold to a religious group and is now home to the Richmond Pentecostal Church and is known as the Zetland Christian Centre. A forestage has been built out for the church to allow for musicians. The rear half of the raised seating has been converted into meeting rooms and offices so the original 837 capacity has now been cut to around 450 however this has been inserted in such a way as to not even touch the plasterwork on the ceiling.

Somewhat surprisingly the Zetland Cinema had in 2002/3 resumed its role as chief entertainment venue in the town as the famous Georgian Theatre and Museum was undergoing a major restoration and expansion and all of its productions were transferred into the Zetland Cinema whilst the work was carried out.

i was the chief projectionist at the zeland cinema from march 1970 till closure; which was not 1982 as is stated on your website, it actually closed on the 6th April 1983. It was owned by the ‘Star group’ who took the building over from a locally owned independent company in december 1956. at this time it was fitted out with four-track magnetic stereo sound. I was pleased to see the zet on your website, having spent many many happy hours there!!

Great to see the Zetland on your site. I have many happy memories of this as a cinema as a child I especially enjoyed the Operatic Socierties productions in the 1960’s and seventies. Why this building is not listed is beyond me I was pleased to see the building re-rendered. I hated the exposed bricks. Why do people in Richmond feel every building in Richmond has to look Georgian The hideous modern sloping roofed canopy and the shop windows detract from an otherwise good art deco frontage. The building could and should be returned to its opening appearance. I know you will think me mad but I much preferred a visit to the Zetland to one at the Georgian. The Zetland is a good example of a small town art deco cinema.

Another view of the Zetland here:

Like David I was a Chief Projectionist at the Zetland but only for 2 months in late 1965. I was a mobile projectionist for the Star group and attended when the resident one resigned. I remember it as being a nice country cinema in far better shape than some of the other Star ones.

yes, maurice woodhead/ i remember you at the zetland . oct /nov 5 you left the building with your girlfriend , she came ant took u lol leaving me with a full house of 803 watching marry poppins be nice to hear from you again dave s RICHMOND YORKS

Some 2008 views of the former Zetland here:–