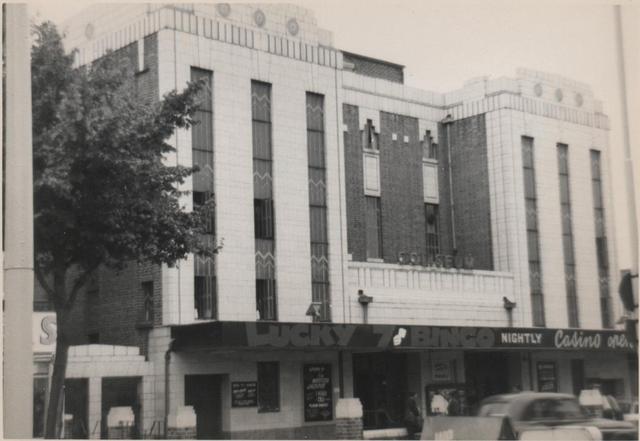 Located on the corner of Melton Road and Shaftesbury Avenue in the Belgrave district to the north of the city centre. The New Coliseum Cinema replaced the older Coliseum Picture Theatre a block away on Melton Road.

The New Coliseum Cinema was opened on 4th November 1933 with Eddie Cantor in "Kid Millions". This magnificent Art Deco style building had a seating capacity for 1,552, with 1,000 in stalls and 552 in the circle, and the proscenium was 35 feet wide. There was a stage for the presentation of variety performances. It was part of the H.D.M. chain of cinemas operated by H.D. Moorehouse.

Part-time bingo was introduced in 1964, and in 1968, the last films were screened and it became a full time Lucky 7 Bingo Club. Later taken over by the Rank Organisation, it became a Top Rank Bingo Club, which closed on 26th February 1989. The building lay empty and unused until 1991, when it was purchased by an Asian businessman and re-opened as a conference centre/banquet hall and boxing venue.

In the late-1990’s, it began screening ‘Bollywood’ films and was converted into a 3-screen cinema, renamed Capitol Cinema. By February 20002, a fourth screen was proposed, but this proved to be a false claim, as the Capitol Cinema was closed in late-February 2002. The building stood empty and unused until 2007, when it was renovated and reopened as the Leicester Colosseum, a 500-seat venue for wedding banquets and conferences/exhibitions, located in the former circle, and a shopping mall containing 32 units in the former stalls area. By April 2017 the building is unused and ‘For Sale’ and nothing had changed by 2020.

This is the original Coliseum which is now called the Colosseum, a shopping Mall. Seems that the two need merging together.