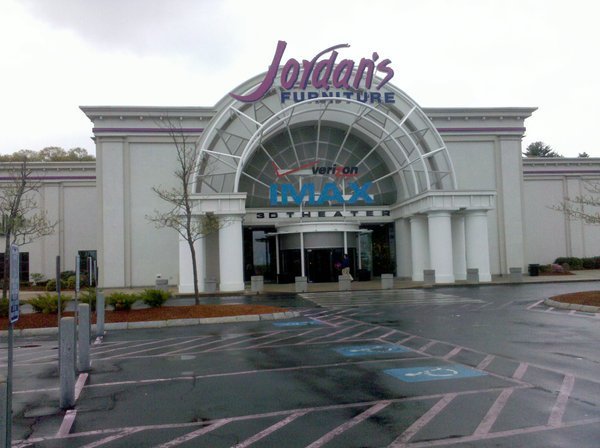 One of two IMAX theaters located within a Jordan’s Furniture store, this was the first to open, in 2002. The seats are lined with body-conforming foam and have individual built-in subwoofers in addition to the theater’s powerful sound system. Patrons enter and exit the theater by walking through the furniture store.

A picture of the theater from the theater’s website: http://www.jordans.com/en/Imax/Directions.aspx

So…an IMAX theatre located inside a furniture store? Now I’ve seen it all!

Two of them – there’s another at Jordan’s in Reading, MA.

I’m waiting for IMAX at my local Elegent John.

Perhaps Wickes & Levitz should have utilized a similar concept to avoid going out of business. LOL!

Jordan’s is a Massachusetts chain that’s known for being both an entertainment destination and a relatively high end furniture store. Prior to this location, they opened a store that has a motion simulator ride in it, they added the IMAX to this location that is themed after Bourbon Street in New Orleans (where it’s Mardi Gras everyday) there’s a location of the legendary local beach seafood restaurant Kelly’s Roast Beef inside as well. When they opened their ‘bean town’ themed location in Reading (north of Boston) they included another, larger capacity IMAX.

It’s a full size multi-story film-based IMAX project with in seat amplifiers, high quality enough that it was one of the few dozen theaters Chris Nolan approved to screen the IMAX prologue of The Dark Knight Rises in in front of Mission: Impossible – Ghost Protocol last winter.