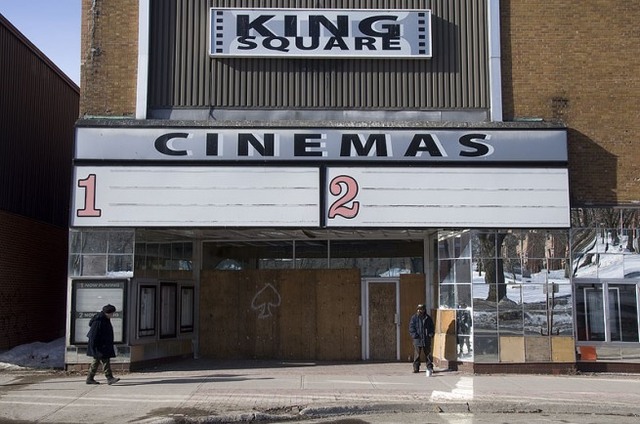 The Paramount Theatre was opened by New Brunswick’s Lieutenant Governor David MacLaren on September 21, 1948 as Atlantic Canada’s premiere movie theatre. When built, the theatre employed the latest film technology and is believed to be because Louis B. Mayer was born in Saint John, New Brunswick. As Famous Players most modern theatre in Atlantic Canada, the original single screen theatre with 1,040 seats had first rights to the latest Hollywood movies, which were shown daily from 1pm to 11pm.

In 1979, the theatre was twinned. Cinema 1 and Cinema 2 had seating for 586 and 454, respectively. The strategic location of the Paramount Theatre on centrally located Kings Square made it a key entertainment venue in Saint John for decades. However, the building became surplus to the Empire Movie Corporation following the opening of their new multi-plex on the East side of Saint John.

It was demolished in October 2013.

Thanks Matt for getting these theatres listed.

Something is odd here. The picture that accompanies the above referenced article is basically the same as the ones in the pictures indicated within the comments for the King Square Cinema, but the addresses in the CT listings are different; also the listing for the King Square Cinema would seem to indicate that the Kings Square is at least partially demolished if not completely.

The King Square/Paramount Theatre should now be listed as demolished. It was torn down in October 2013. The article on the theatre’s demolition is below:

I do NOT believe that this was the Paramount Theatre in Saint John, New Brunswick. I believe this was originally an Odeon Theatre!!!

Well when you Google Paramount Saint John and it shows photos with the Famous Players logo and marquee, it looks identical to this one.