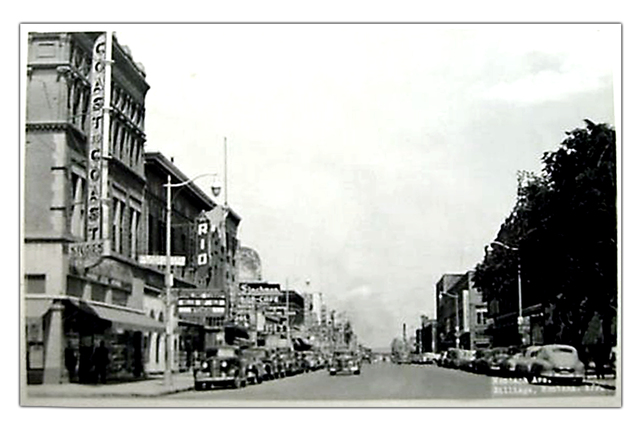 The Liberty Theatre opened on Sept 11, 1928, in a former dry goods store, which had been around as early as 1910. This was Billings' fifth theatre and joined the West’s Theatre, Babcock Theatre, Lyric Theatre and Regent Theatre.

On April 22, 1934, it was under new management with a name change to the Rio Theatre and opened with Katharine Hepburn in “Morning Glory”.

After February 12, 1955, their ad disappeared from the Gazette’s theatre page, leaving the Fox, Babcock and Lyric theatres downtown.

One memory of the Rio Theatre by a local citizen in the Gazette was that you could see a good movie for a cheap price. By 1956 the location was converted to retail stores, with a jewelry store occupying the building at least until 1976.

The date of demolition is unknown but in 2010 the site was the parking lot next to Far West Galleries and across the street from the Western Heritage Center.

From Billings a black & white photo postcard view of the Rio Theatre.

Thanks for posting this photo. I went to the Rio on Saturday morning in the late 1940’s. It was mostly kids attending. A fellow would entertain us before the movie started. One day he had a contest to see who could whistle the loudest after eating a saltine cracker. Nice memories.

I posted the Rio and Liberty grand opening ads in the photo section for this theatre.