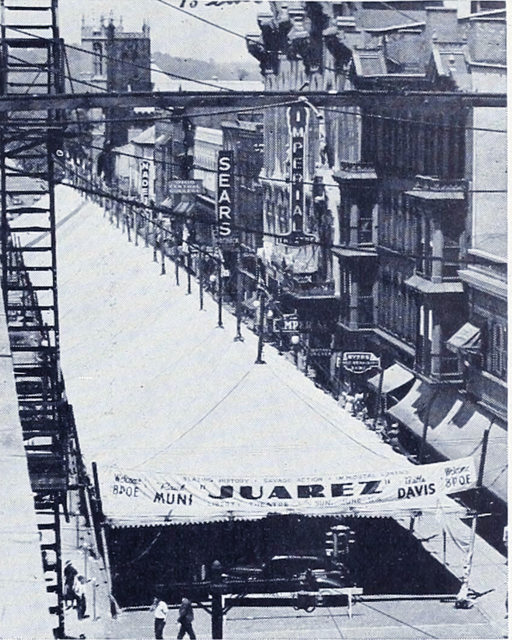 Opened on January 20, 1880, the Schultz Opera House was designed in a high Victorian style by Chicago architect Oscar Cobb. Judging from old photos, the ornate facade was probably made of cast iron, then a popular building material. The interior was described some years later by one observer as "…most perfect and convenient, in all its appointments, and second only to the Euclid Avenue Theater, in Cleveland, in decoration."

The theater presented live performances on a stage 70 feet wide and 35 feet deep, large enough for full-scale productions of most of the popular plays and operas of the day. The seating capacity of the house on opening was 1,118 on three levels.

Around 1920, when an organ was installed, the Opera House was renovated and renamed the Liberty Theatre, presenting vaudeville and movies. A new Liberty Theatre opened a block south on Fifth Street in 1927, and the former Opera House/Liberty Theatre was operating as a movie theatre called the Imperial Theatre. At the time it closed, it was called the Variety Theatre.

The Variety Theatre was closed on October 14, 1952, and the venerable building was demolished to make way for a new J.C. Penney department store, which opened on the site in 1954. The last photos of the Variety Theatre showed the same Victorian facade the building had displayed for over 70 years.

This theater might have had one or more other names between the time it was the Liberty and when it became the Imperial. Zanesville had an Imperial Theatre located on Main Street operating as early as 1916 and still open in 1927 when the Liberty name was moved. The Name Imperial continued appearing in local newspaper ads into the 1930s, but I’ve found no address for it prior to 1948, when it was located in the former Opera House. The year this theater became the Imperial remains a mystery.

Google Books has a preview of the Arcadia Publishing Company’s Images of America series book Zanesville, which features photos of this theater as the Schultz Opera House, the Imperial, and the Variety.

I found another photo in the Zanesville book which shows N. Fifth Street in the 1930s, and the Opera House building has a vertical sign that says Imperial, so that name belonged to this house by then. It’s possible that it became the Imperial as soon as the Liberty name was moved in 1927.

Because Google’s camera truck didn’t go down Fifth Street, it’s only possible to see the Variety Theatre’s site from a distance. As Street View is currently set, looking north from Main Street, the Variety’s site is occupied by the pale building with a decorative false gable above its entrance, down the block on the right and just to the left of the foreground lamp post.

The January 21, 1927, issue of Motion Picture News had this item pertaining to the Schultz Opera House and two other Zanesville theaters:

“The Shultz Opera House, Zanesville, Ohio, is to become one of a chain of three houses which will be operated by the Imperial Theatres Co., recently incorporated at Columbus, Ohio. According to announcement by Manager Sam K. Lind. approximately $70,000 will be spent for improvements which will include a new organ. The Shultz was the first house in the city to play legitimate attractions, having recently gone into vaudeville and pictures. The new organization will also operate the Imperial and Quimby theatres in Zanesville.”

On June 17, 1928, The Film Daily reported that the three houses owned by Imperial Theatres had been taken over by Caldwell Brown, operator of Zanesville’s three other theaters. The names of the houses were unchanged from 1927, except that the Schultz Opera House had become the Schultz Theatre.

In 1933, the Caldwell Brown circuit got into financial trouble, and the July 15 issue of The Film Daily reported that the company’s Weller Theatre would be transfered to the Shea circuit. The other three houses Brown was operating would be part of a new company formed by Brown and Sam Lind. The three theaters were the Liberty, the Imperial, and the a house called the Columbia Theatre.

This raises the possibility that by 1933 either the Schultz Theatre or the first Imperial Theatre on Main Street had been renamed the Columbia. If it was the house on Main Street, then this theater had probably been renamed the Imperial by that time. This house was renamed the Imperial at some point in the 1930s, in any case, and prior to 1933 would be as good a time as any. A local source (newspaper announcement or the address in a city directory, for example) will have to confirm the change, though.

Became the Liberty Theatre at the end of WWI in 1918.