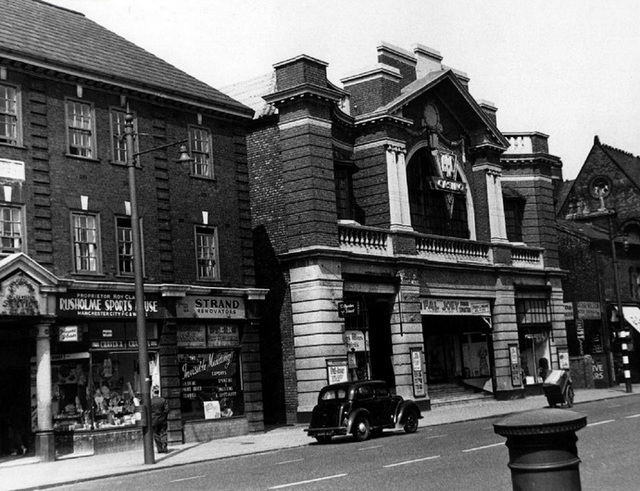 Located in the Rusholme district of Manchester on Wilmslow Road near the corner of Stone Place, opposite Dickenson Road. There had been a cinema operating on this site since 1916. In 1922, the Casino Cinema was built for Ben Kanter. It was one of the new breed of ‘super cinemas’ being built at that time, and opened on 6th March 1922.

The exterior of Casino Cinema had a curved recessed bay, with a central section containing an arched window topped by a pediment. Seating was provided in stalls and circle levels and the proscenium was 35 feet wide. The cinema boasted a ballroom and a cafe. It was taken over by the Associated British Cinemas(ABC) chain on 1st July 1929.

It was a successful cinema, and continued until a fateful night on 20th October 1960, when it was destroyed by a fire. The final fims shown were Anthony Newley in "In the Nick" and Dick Clark in "Because They’re Young". The remains of the building were later demolished and the site remains vacant.

A vintage photograph of the Casino Cinema in March 1958 (playing the Odeon circuit release):
View link

ABC: Associated British Cinemas were the best cinema chain and had the most distinctive Neon signs, indicating the cinema’s name across the center.

It was a shame when they dropped all of their names and went with just ABC where ever. Everything, today, seems to be just bland initials!

Following demolition, the site remains anything but ‘vacant’ as stated. Vacant of a building it may be, but sited as it is, directly opposite the stem of a very busy ’T' junction, it now earns more regular revenue than it ever did as a cinema. It is a prime advertising site, leased to the agency Classic Channel. It hosts two large hoardings, one of which is now a digital TV screen. Sadly, during 2016 it was allowed to become run-down due to lack of maintenance. That has since been addressed.