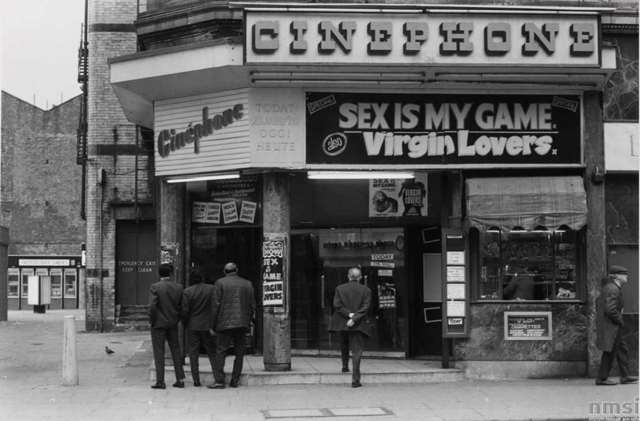 This city centre cinema was opened by the Provincial Cinematograph Theatres(PCT) chain in 1914 as the Market Street Picture House. It was located on Market Street, facing Spring Gardens. By 1926 until 1946, it become part of the J.F. Emery circuit.

From September 1949, it became a news theatre, known as the Market Street News Theatre. This only lasted six months, closing in February 1950. Five days after closing it re-opened as the Continental Cinema, specializing in European films, and French film star Anouk Aimee attended the opening which featured her film "Les Amants de Verone". The Continental Cinema was closed in June 1952, and it reverted back to being a news theatre, which closed in February 1953. The following day after closing, it re-opened as the Market Street Theatre, operated by Jacey Cinemas, again screening European films, and this lasted until 1955.

It was re-named Cinephone Cinema, again specializing in Continental films, but by the late-1950’s and into the 1960’s it had moved from art house films to Continental sex films.

It was demolished along with many other buildings in the area and the Arndale Shopping Centre was built.

It was a sleazy place,but we had some fun in the box.The chief called us all Bill.

Hi Baz, who are you? I worked with Eddie in the projection box in 72ish, My name is Chris and I’d love to hear from you.

This was our cinema so I believe many of your readers could be interested to know more about my late Grandfather Joseph Cohen. I have only recently added to my website ‘The History of Jacey Cinemas’ with over 300 images of press cuttings and photographs from the early 1930’s onwards. He was also involved in property and other projects, so there is a lot of information about him (not previously available on the Internet). Please do have a look at: – http://www.jncohen.net/JaceyGroup/JosephCohen.htm

Hi Colin, I do remember a Colin, I may be getting confused but I seem to recall someone there used to play keyboards in Hedgehoppers Anonymous, and someone was the projectionist at the ABC in Eccles?