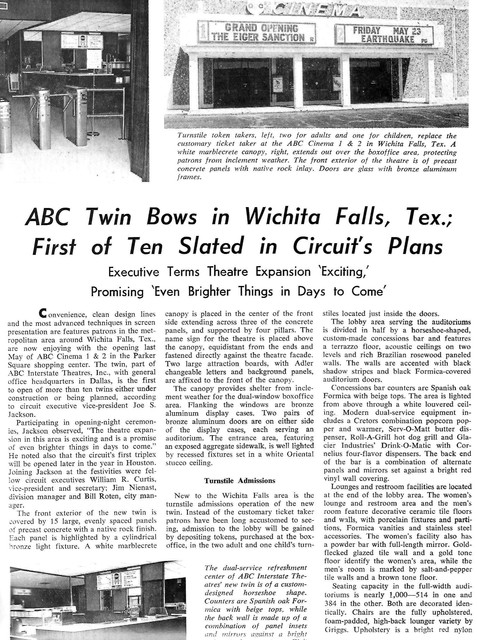 Located in the Parker Square Shopping Center in Wichita Falls, Texas. Opened by ABC Interstate Theatres on May 23, 1975 with Clint Eastwood in “The Eiger Sanction” & Charlton Heston in “Earthquake”. Seating was provided for 514 and 384. Admission was by a turnstile and tokens system. This twin screen theatre served the area with some of the 1970’s greatest films, "The Godfather","Jaws" and many of the 007 movies. It was a simple no-frills operation.

Was it possibly a Jerry Lewis cinema?

Sure sounds like one,but I don’t know if Lewis was ever in Texas,seemed liked a lot of his screens were up and down the East coast.

Well, it would be probably more accurate to say that there were more in the eastern half of the United States than the western, but there were JLCs, for example, in California, Utah, and Washington. One websource says there were, at the peak of their operation, about 170 nationwide, many of which are not listed here or on any other cinema website, probably due to the fact that many had very short existences. A quick web search turned up a JLC in the Texas cities of McKinney, Lubbock, Houston, and Monahans. I would say this theater Wichita Falls may have been one as well; your indication that it was popular in the 1970s might be a clue.

If this is the same theater that I have listed in my JAWS anniversary retrospective, then I can confirm it was operated by ABC Interstate in the mid-1970s.

By the end of the ‘70s it would have become a Plitt, and, if it stayed open into the late-1980s, a Cineplex-Odeon. Whether it began life as a Jerry Lewis operation I couldn’t say.

And, not to be too picky, but the screen numbers according to newspaper promotion were “1 & 2” (not “I & II”) and “Wichita Falls” was not a part of the name.