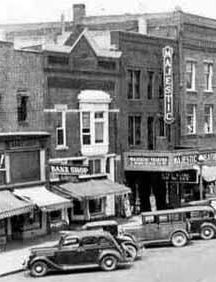 The building exists today having been in retail use.

From Rice Lake a 1922 photo of the MajesticTheatre.

Majestic History via the Old School Rice Lake Facebook page. It accompanied the photo previously identified as 1922, but the silent version of “The U.P. Trail” noted on the theatre poster and promotional wagon was released in 1920.

Majestic Theatre-Early `20’s Downtown Rice Lake. In the summer of 1920 a local businessman,Eusebe Craite,built a brand new theater,The Majestic,at 214 N. Main St. It had a front of buff colored Navajo brick & a seating capacity of 470,while the inside had a balcony with opera chairs,a modern screen & 2 motion picture machines. This was a 3 story building with an attractive outdoor marquee & living quarters for Mr. Craite & his family in the upper story. The Majestic opened on 10-6-1920 with Douglas Fairbanks,Sr. starring in “The Mollycoddle”. Only 2 years later,the theater was purchased by George Miner,who remodeled it to 2 stories. From 1924-1935 the Majestic was Rice Lake’s only movie theater. On Saturday 3-16-1929 Rice Lake’s first talking movie was shown there. In 1935,Mr. Miner built a new state of the art theater,The El Lago,by remodeling an old feed mill on the corner of Main & Highland Sts. It had the city’s first air conditioning. For 20 years,from 1935-1955,Rice Lake had two theater’s downtown to choose from. The last movie at the Majestic was “The Sands of Iwo Jima” starring John Wayne on 3-5-1955.