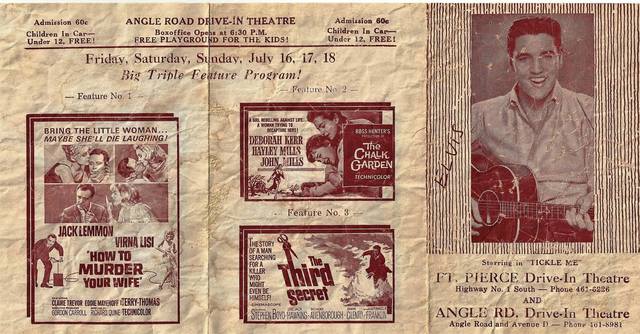 On August 15, 1954, Robert Koblegard Jr. (dba Veebee Theatres Inc.) announced plans to build a new drive-in theatre on Avenue D, east of Fort Pierce, Florida. They selected a site and started construction on the new drive-in doing grading and building of the ramps. For some reason they decided to move the new drive-in location beside the one that was just started. Maybe the field layout was better and larger at the new location? On April 3, 1955, Loblegard sold their theatre holdings in Fort Pierce, Stuart, Vero Beach, Cocoa and Melbourne to the First Southeast Corporation. I believe since the Angle Drive-In at that time was under construction/completed and was included in the sale. After the sale, all of the theatres owned by First Southeast Corporation continued to be operated by Talgar Theatres Inc.

The Angle Drive-In was opened on December 27, 1956, screening the 1955 western “Run for Cover” with James Cagney, Viveca Lindfors and John Derek. The second feature was the 1955 science fiction “Conquest of Space” with Walter Brooke, Eric Fleming and Mickey Shaughnessy. The new drive-in featured a CinemaScope screen with in-a-car speakers for 500 cars. In 1960, the First Southeast Corporation sold their theatre holdings which included the Angle Road Drive-In, along with the Vero Drive-In, Stuart Drive-In, Fort Pierce Drive-In, Cocoa Drive-In and Melbourne Drive-In to Frederick H. Kent and Harry T.L. Hyde (dba Kent Theatres Inc.) of Jacksonville, FL. The Angle Road Drive-In was finally closed in 1980. The old drive-in site is now an empty lot and still has the concession stand/two story projection booth still standing.

Pictures of the Angle Road Drive-in from its page at Drive-ins.com: http://www.drive-ins.com/gallery/fltangl

Here is You Tube video