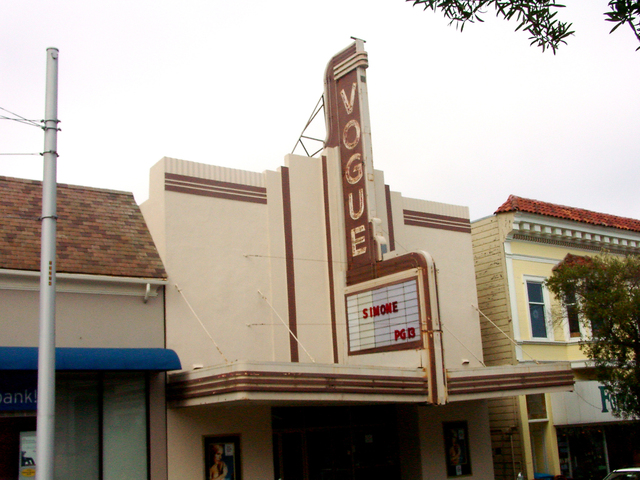 The Elite Theatre was opened in 1910. It was renamed Rex Theatre in 1919. In 1939 it was renamed Vogue Theatre, when at that time it was operated by Blumenfeld Theatres. It was later operated by United Artists. In 2002 UA installed a new floor in the auditorium and put in 350 brand new seats with cupholders. In August 2002, the roof was repaired and plaster work was done on the ceiling of the auditorium.

The SF Theatre Foundation just bought the Vogue and will operate it as Peerless Entertainment.

I hope they go back to using the stage lights and the red curtains before the movie.

here is a link with more info http://www.sfntf.org/images/vogueflyer.pdf

The current seating capacity is 240 seats.

History from the theatre’s website (provided by LostMemory above) states that this theatre was built in 1910, and only became the Vogue in 1939 (the era of most of the Vogue theatres). Also alternate names: Elite Theatre from 1910, at some point was also known as the Rex, then the Vogue. I can’t wait to check this theatre out next time I’m in SF!

Here’s a photo from 2006
The Vogue- Nothing Dies With Blue Skies.com

I visited this theater yesterday in my quest to visit single-screen theaters around the country. It is a very nice theater with excellent projection, and I enjoyed my visit. My only complaint is that the curtain was already open and there were no stage lights. The front of the auditorium was just dark. I feel that if a theater has a curtain, they should use it, along with stage lights. It would make the place much more attractive and inviting. Too many of the single-screen theaters I visit are so dark that you can’t appreciate the decor and ornamentation of the place. It’s always disappointing.

The history page of the Vogue’s web site says that the house opened in 1910 as the Elite Theatre and was known as the Rex Theatre before becoming the Vogue in 1939.