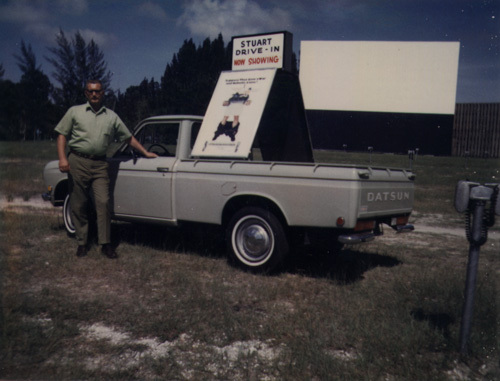 George Apostolopoulos puchased 12 & half acres on Britt Road and U.S. 1 from Morris Cassaboom in September 1952. George hired Tilton Construction Co. to clear the land with plans for his own 350-car capacity drive-in movie theatre. By October, Apostolopoulos had an offer for purchase of the site from the Talgar Theatre Company chain, associated with Veebee Theaters Inc. for their new drive-in theatre. The Stuart Drive-In opened on June 12, 1953, screening the 1951 western “Rawhide” with Tyrone Power, Susan Hayward and Hugh Marlowe. The second feature was the 1951 comedy “Let’s Go Navy” with the Bowery Boys. The Stuart Drive-In was opened by D.B. Garner & B.F. Hyde Jr. (dba Talgar Theatre Co.) along with Rupert N. Koblegard Jr. (dba VeeBee Theatress Inc.) Koblegard had formed a partnership to the Talgar Theatre Co. on the ownership and operation of his airers. The Koblegard family was well known as owners and operators of theatres in Florida. The Stuart Drive-In featured parking ramps that could hold 300 cars along with in-a-car speakers and a 60ft wide screen. Wayne Page was the theatre manager when it opened.

In 1955, Koblegard sold his theatre holdings in Fort Pierce, Stuart, Vero Beach, Cocoa & Melbourne, Florida to the First Southeast Corporation. After the sale the theatres continued to be operated by the Talgar Theatre Co. Eventually in 1960, the First Southeast Corporation sold their theatre holdings which included the Stuart Drive-In along with the Vero Drive-In, Angle Road Drive-In, Cocoa Drive-In and Melbourne Drive-In. to Frederick H. Kent & T.L. Hyde (dba Kent Theatres) of Jacksonville, FL. VeeBee Theatres was also disolved in 1960 at this time. Unfortunately, disaster struck on August 27, 1964 when Hurricane Cleo demolished the Stuart Drive-In. Kent Theatres Inc. rebuilt the drive-in theatre with a new screen tower and concession stand. I believe this was around November off 1968.

In February of 1974, Kent Theatres Inc. sold the property the Stuart Drive-In was sitting on and was renting it from the new owners. Unfortunately Kent Theatres Inc. were hard pressed in making rent payments due to lack of business. As a result the 17 acre tract was placed on the market to be sold. The last movies to be screened at the Stuart Drive-In were “Magnum Force” & “The Deadly Trackers” on September 1, 1974. The property sat empty until early-1992 when the old drive-in was cleared and a new Target store was built on it.

Last note: The entrance to the Stuart Drive-In was on NW Britt Road, not U.S.1. The listed address is the Target store that occupies the old drive-in site.