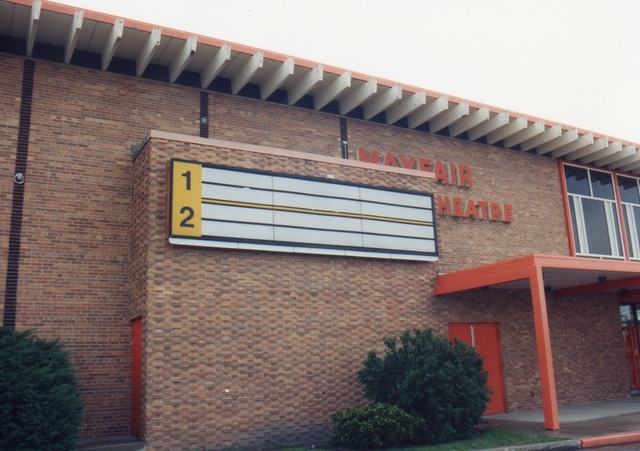 This opened on October 11th, 1963 next to the Mayfair Mall by Prudential Theatres, which became United Artists in 1969.

Hard to believe GCC was opening Cinemas while closing so many.Who was running my old theatre Chain?

October 9th, 1963 full page with picture is at
View link
November 18th, 1983 ad for the twin is at the upper left of the page at View link

This theater was kind of an “odd duck”, it shared certain design ideas with it’s sister theaters, Southgate, Mayfair and Ruby Isle, but had a couple of notable differences, the main one being the screen. This theater had a shadow box around the screen, like General Cinema would do years later, but unlike GCC it had screen masking and a main curtain, which was really strange, the curtain was in front of the box, so whatever was still on screen when the curtain closed was really distorted. Working the booth was like working in a drive-in, the machines pointed up, and it was a damn small booth, especially when you consider it held 2 Norelco AA11 35/70 projectors. Which brings me to oddity #2, I was told by long time projectionists that it never ran 70mm until Logans Run, in fact other than the projectors and sound system, everything else was hauled over from the Southgate, reels, splicer, cue marker etc. I only worked the booth early in the 1970’s, ran the Exorcist there, worked there once after that for a 70mm run, some forgetable thing I can’t remember. The one other annoying thing about working here was the booth exhaust, it went out the side of the building, and if the wind was strong out of the east, it would blow the carbon exhaust back into the booth, the only way to fix it was to crack the booth door open a bit so the draft would increase to the lamps. The door opened directly to the lobby, so you never knew who might stick their head through the door. All that said, the theater was still a vast improvement on anything built recently!