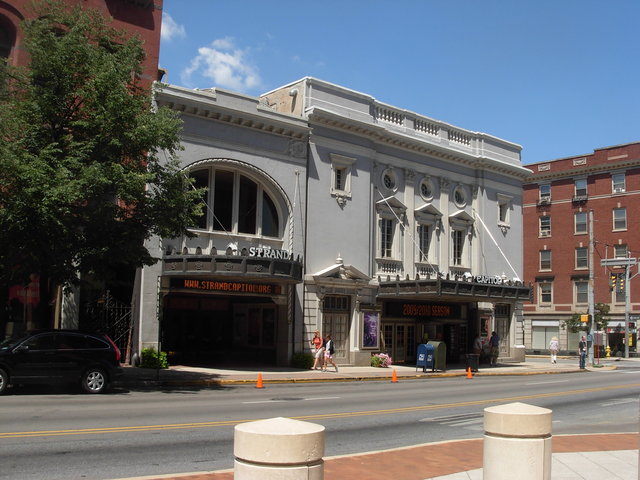 Built 1906 as a one-level dance hall named Theatorium; converted to movie theatre and remodeled in 1917 to be renamed Jackson Thetare.

Purchased by Nathan and Louis Appell Sr. in 1926 it reopened as the Capitol Theatre in 1927. It is equipped with a Wurlitzer theatre pipe organ. Closed in 1977 but renovated and reopened in 1981 as part of the Strand-Capitol Performing Arts Center.

The Strand-Capitol Theatre has its own page on Cinema Treasures.

Does anyone have any information or photos for the Hi-Way Theatre that was on Carlisle St? Have several ads for it. Thanks!

The HiWay Theatre was located on W. Market Street near the border with W. York. It was close to the fire house which was located across the street. The Hiway Theatre, at least while I was living in York in the 1960’s going to college was operated by the William Goldman Theatre chain from Philadelphia. The Hiway had a special reserved seat engagement of “The Sound of Music” in 1966, but it was shown in 35mm and not stereo sound. The theatre building itself is still standing, but the marquee and front of the theatre have been demolished. It looks like it has become part of the Pewterax company which is located next door to the left of the theatre.

Marcel: William Goldman Theatres used that strange booking policy. If they did not have a first run movie to play, they would fill in with “x rated” movies, but never the XXX that were shown at the adult theatres that operated at that time. The HiWay Theatre was all one floor and my guess is it seated somewhere in the 600-700 range if my memory of the interior is correct. I know there were two aisles with sections of seats along the walls and a center section of seats. The proscenium, once again if my memory serves me, was framed in wood rather than the traditional plaster. I remember getting the feeling looking at it like a ranch house type feeling. If anyone esle has any more information it would be nice to add the theatre to this website, because I do not think it is currently listed. I think the only time I was in this theatre was to see “Sound of Music” which I had already seen a long time before this at the William Goldman Midtown Theatre in Center City Philadelphia. There it was shown in the Todd-Ao and stereo sound.

The Jackson Theatre was the subject of this brief item in the September 1, 1917, issue of The Moving Picture World:

“York, Pa. — The Jackson theater here is reported to be prepared for their opening during the early part of September. The theater is of the 1,000-seat variety, handsomely furnished and of the best construction. R. C. Jackson & Co., of Lebanon, Pa., who are the owners of this house, also control a chain of theaters in this vicinity.”

R. C. Jackson was listed as the manager of a 400-seat movie house called the New Jackson Theatre operating at York in 1909. It was the only house in York that was on a list of movie houses in the January 16, 1909,issue of The Billboard. This makes me suspect that the New Jackson of 1909 was the Theatorium of 1908 renamed. If it was also the same house as the Jackson of 1917, the rebuilding must have been extensive for it to have gone from 400 seats to over 800.

R. C. Jackson & Co. also operated houses called the Theatorium and the Jackson in Lebanon, Pennsylvania (both in operation in the early 1920s.) R. C. Jackson & Son were listed as managers of the Alvin Theatre in Columbia, Pennsylvania, in various issues of The Billboard in 1907.

The May 1, 1926, issue of Motion Picture News had an item about the purchase of the York Opera House and the Orpheum Theatre at York by Nathan and Louis Appell. Appended to the end of the item was this paragraph about the Jackson Theatre:

“The Jackson Motion Picture Theatre, York, Pa., went under the control of the Nathan Appell Theatre Enterprises on Monday, April 19, the deed for the sale of the property for $205,000 having passed from Mr. and Mrs. John A. Jackson, of York, to Nathan and Louis Appell in April.”

I have found that R. C.Jackson died in 1910, after which time the operation of R. C. Jackson & Co. was carried on by his sons.

The organ was a Wurlitzer, style 190 Special, III/8 (sic!) opus 1395, shipped from the Wurlitzer factory in July 1926. It’s something of an oddity: Wurlitzer only built 4 to this design. Does anyone know if it, or any part, still exists?

The Strand Capitol Performing Arts Center was renamed the Appell Center for the Performing Arts in May 2017. The naming was in honor of three generations of leadership and support from the Appell family – starting with Nathan Appell and Louis Appell Sr., who built the Strand Theatre in 1925 and then purchased and renovated the Jackson Theatre, reopening it as a movie theater called the Capitol Theatre in 1926. The theater names remain unchanged.

Films are currently screened in the Capitol Theatre, typically on a weekly basis. Classics, family and indie films comprise the focus of current film programming.

As of the date of this submission, plans are underway for a renovation of the Capitol Theatre. Renovations will focus on improving customer comfort and amenities will retaining the classic feel of the theater.

The Jackson Theatre was one of the ten movie houses listed at York in the 1914-1915 American Motion Picture Directory.

Some of the Dempwolf company’s plans and drawings for the Jackson Theatre, dated 1917, can be found on this page of the York County History Center web site. It appears that no major alterations to the building took place in 1926 when it was renamed the Capitol Theatre by new owners Nathan and Louis Appell. The rebuilding of the house had taken place in 1917. The Theatorium had been showing movies at least as early as 1908, and as the Jackson, which was its name by 1909, the theater had always been a movie house, though it was a smaller and far less elaborate one prior to the 1917 project.