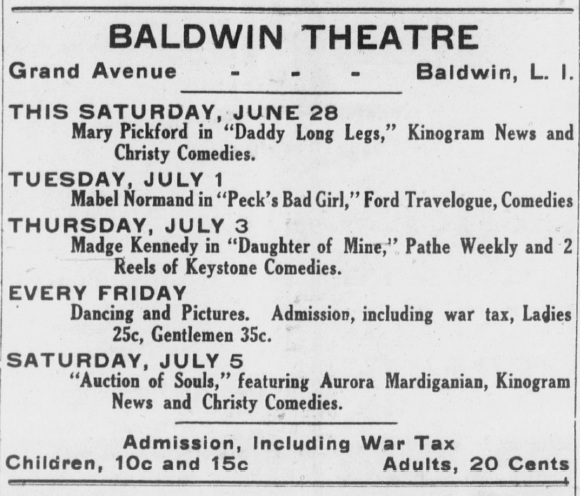 The original Baldwin Theatre dates back to the early-20th century. It was listed in the 1914-1915 edition of American Motion Picture Directory and opened December 24, 1915. Since it didn’t have a sloping floor it was used by the high school for a basketball court. Meetings and dances were also held there.

According to a November 19, 1926 article in the Baldwin Citizen the theatre was to be replaced by stores. The article indicated that the tiny theatre had only recently closed due poor attendance resulting from competion of a large neighboring theatre, presumably either in Rockville Centre or Freeport.

Sure could use an address, more info and photos.

In a February 16, 1986 article in the NYTimes that I was directed to by another “Cinema Treasures” poster, another movie theater (a precursor to the one built on Merrick Road and called the “Century’s Baldwin” in this site) is mentioned. Here is the paragraph from the article that mentions it:
“The Baldwin was not the village’s first movie house. A retired woman who lives near us remembers a store-sized theater on Grand Avenue around the corner from Howie’s. ‘'It cost a quarter,’‘ she said. ’‘My girlfriends and I saved up all week for Saturday. The piano player was always late and when he did get there he’d sit and study the music like it was a concerto or something and we’d clap and clap until he got started and the movie started. I had this awful crush on William S. Hart!’'

An old map from 1939 (http://www.baldwinpl.org/wp-content/uploads/2012/09/HicksNeckpamphlet.pdf) indicates this was the third building on the right north of Merrick Street. Google Maps overhead view shows a possible candidate at 2419 Grand Avenue, if this is still standing.

Unless another Baldwin Theatre existed on Grand Avenue in 1915, this one opened on December 24, 1915.