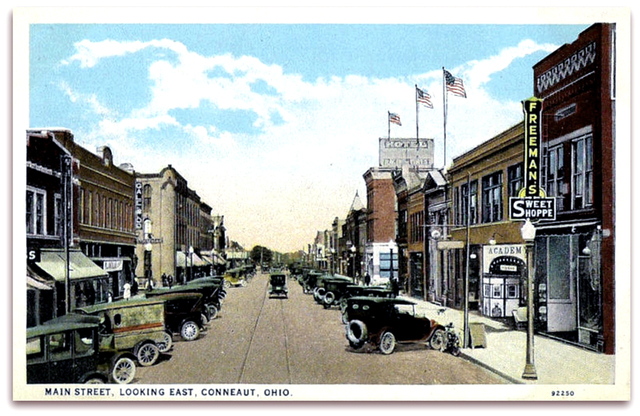 From the early 1900s a postcard view of Main Street along with the Academy Theater in Conneaut.

There’s a 1920s photo of Main Street on page 71 of the book “Conneaut,” by David P. Owens, and it shows the Academy Theatre (Google Books preview.) It looks like a small nickelodeon-style house. The photo caption says that the building is still standing and is occupied by Gerdes Pharmacy. The Internet says that Gerdes Pharmacy is at 245 Main Street.

I ought to have mentioned that the photo in the book is the same one Don linked to in the first comment. The significant information is that in the caption that reveals the address.

A letter dated January 11, 1916, from the Academy Theatre in Conneaut was displayed in an ad from the Gold King Screen Company that was published in the February 5, 1916, issue of The Moving Picture World. The letter said that a Gold King screen had been in use at the Academy for about two years.

The 1929 FDY lists the 350-seat Main Theatre in Conneaut, but no Academy Theatre. I think the Academy might have been renamed the Main in late 1927. The January 28, 1928 issue of The Film Daily said that M. A. Shae had bought an interest in the Main and La Grande Theatres in Conneaut.

The Academy Theatre opened on April 4, 1912. From News Herald ads the house often employed a 4 piece pit band for entertainment and silent film accompaniment. Sometime in the twenties it became the Main Theatre. The ads also show that other houses of entertainment existed at the time of the Academy’s opening. The Gem, the Star, the Theatorium and the Republic. The Academy opened 11 days before the RMS Titanic sank.