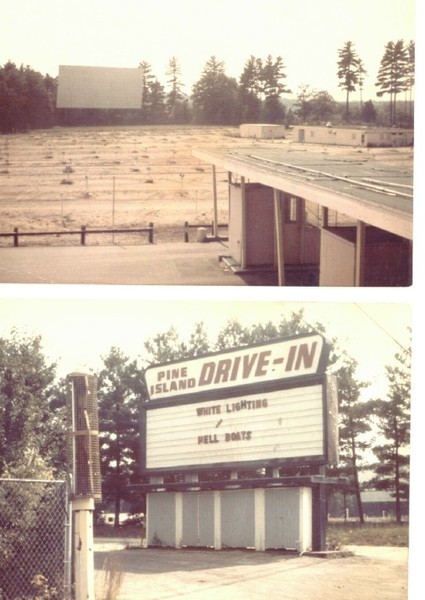 Opened in 1940, the name makes you think of a drive-in located in the South, but the Pine Island Drive-In was one of two drive-ins in Manchester, New Hampshire, the State’s largest city.

The Pine Island Drive-In parked 375 cars making it the city’s largest in the 1950’s. It was owned by M. A. Shea Theatres Ent.

There are two pictures of this theater on its page at Drive-ins.com: http://www.drive-ins.com/gallery/nhtpine

I guess it is still open.I assumed it was long gone.

The address Route 3A and 18 Maps out to show the Southern United States and Central America, not very helpful. The new address will map properly.

It was part of an Amusement Park which closed a few years before the Drive-In.

Was there an indoor movie theater in the Pine Island complex at one time? The Theatre Historical Society on-line archive has the MGM Theatre Report for a “Pine Island Theatre” in Manchester; it’s Card # 499. But no one filled out the form so there is no information, only an undated photo probably made about 1950 out on a highway.

I went back and looked at MGM Card # 499 again. Although they left out “Drive-In” in the theater name, it’s obvious from the photo that it’s this drive-in theater.

Site is now an office complex.

The July 10, 1940 The Exhibitor reported “Mammoth Drive-In recently opened at Pine Island Park, Manchester, under management of Barney J. Williams, and capacity for 400 cars.” Perhaps it meant mammoth as an adjective and not the name.

The first drive-in list, quoted by Kerry Segrave in his book Drive-In Theaters, was the Film Daily Year Book 1942. It included the Pine Island Park-In Theater in Manchester.

The Pine Island’s last appearance in the Motion Picture Almanac’s drive-in list was the 1979 edition.

only the outline remains which is clearly visible!