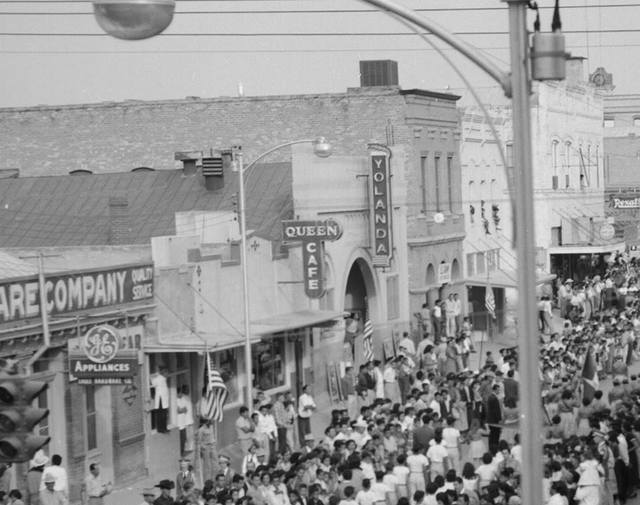 The Yolanda Theatre was open in the late-1930’s with seating listed at 395. It later went over to Spanish language films and was closed in the mid-1960’s.

The address of 137 E. Main Street on the Map puts it down the hill from the theater. The new address will map properly.

The Yolanda Theater was located on Main street, in front of the Riskinds store, next to the Queen Cafe. It showed mostly spanish movies. My parents tell me that during the depression, kids could get in for a safety pin or some small article. When I was growing up in the 50’s it cost .15 cents. Unlike the Aztec which cost .25 cents.

The theater in question was named after Sam Swartz wife who was Yolanda Swartz. Also owners of the famous and beautiful Aztec Theater.

ArleenDel is correct. This Facebook page has a photo showing the Yolanda Theatre, and it was mid-block. A comment down the page says that it was on Main Street between Jefferson and Adams Streets. It also says that the building is still standing, but comparing Google street view with the vintage photo it looks like the upper part of the building, including the original roof, has been removed.

The arched front on the building in the old photo was characteristic of movie theaters of the early 1910s, so I would guess that the Yolanda was a very early house, though it might have operated under some other name early in its history. So far the only theater name I’ve found for Eagle Pass in the early trade publications was a house called the Star, mentioned in 1918.

Thanks for the FB page link, Joe Vogel. I don’t remember the arch on the entry way during the years I went there, early to mid 60’s. Spanish was my first language so at “El Yolanda”, I grew to know all the Mexican actors, singers of the 50’s & 60’s. We also used to go to the Eagle Pass? Drive In, all the way up Main Street to where they eventually built a lake. Ten cents walk in (oh, yeah, we walked sometimes) or 50 cents a carload. Once I hit the upper grades and jr. high, we used to go to “The Aztec”. I remember watching “Valley of the Dolls” —– wow, lots of memories there!