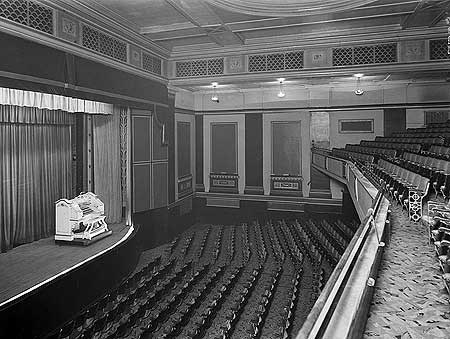 Located on Northgate Street near the junction with Worcester Street. Originally built as Goddard’s Assembly Rooms, it was converted into the 300-seat Theatre De Luxe in 1909. A small organ was installed.

It was a popular cinema, and in 1921, adjacent properties were purchased and demolished to enable a new cinema to be built on an expanded site. Designed by local architect William Leah, it had an impressive portico flanked by two columns. Above the entrance was a cafe. Inside the auditorium, seating was provided in stalls and circle levels.

The Theatre De Luxe opened on 17th April 1922. In August 1923, a Wurlitzer style F organ was installed, which had originally been installed in the Union Square Theatre, Cleveland, Ohio. This instrument was later reposessed by the Wurlitzer company.

In 1929, the Theatre De Luxe became the fourth cinema in the United Kingdom to be equipped with sound, and from the 18th February 1929, Al Jolson starred in "The Singing Fool" for a two weeks run. The film was so popular, with people travelling from Bristol and Birmingham to view it, that it was returned for a further one week run.

In 1934, a Wurltzer 3 Manual console was installed, and it was opened by organist and theatre manager Wyndham Lewis, and was broadcast regularly. The Theatre De Luxe was taken over by the Oscar Deutsch chain of Odeon Theatres Ltd. on 11th October 1937.

Disaster struck in the early hours of the morning of 30th January 1939, when a fire destroyed the auditorium. The facade and foyer/restaurant area was spared. Odeon Theatres had plans drawn up for a replacement auditorium to seat 1,650, designed by Harry Weedon. These plans were approved in August 1939, but were never carried out due to the outbreak of World War II.

In 1959, the derelict remains of the Theatre De Luxe were demolished and a Lloyds Bank, shops and offices were built on the site.

Vintage photographs of the Theatre De Luxe in 1938:
http://www.ukwurlitzer.co.cc/1590.html