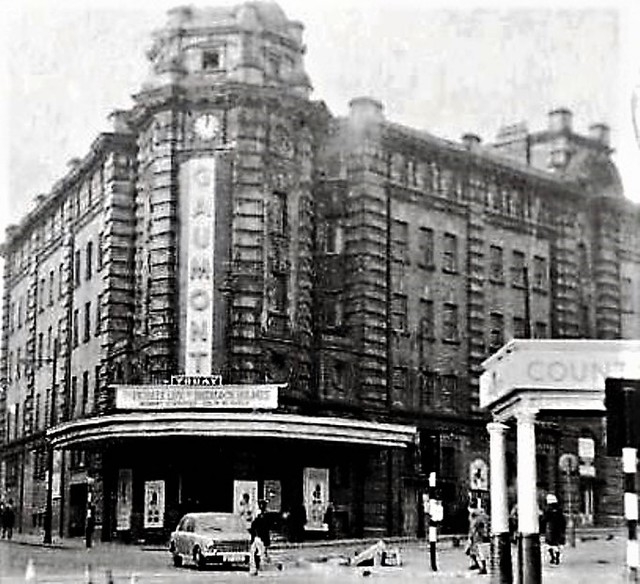 Barrasford’s Royal Hippodrome Theatre was opened as a variety theatre on 28th September 1906. It was built for and operated by Thomas Barrasford, and was last of his chain of variety theatres to be built. Seating was provided in orchestra stalls, dress circle, balcony levels with additional seating in boxes. The Royal Hippodrome Theatre had a 60 feet deep stage. The theatre was located on a prominent corner site, close to the Theatre Royal and the Stoll Moss Empire’s chain Empire Theatre of Varieties.

From its opening, films were part of the variety programme, presented on the ‘Barrascope’. After the death of Thomas Barrasford in 1910, the Hippodrome Theatre came under the ownership of T. Allan Edwardes, who had a chain of theatres in the Midlands, notably in Derby, Birmingham and the Potteries.

The Hippodrome Theatre was taken over by the Provincial Cinematograph Theatres (PCT) chain in June 1927, and it closed as a live theatre in October 1927. After refurbishment, it re-opened as a cinema on 7th November 1927 with Gloria Swanson in "The Loves of Sonya" supported by the documentary "Our Prince" about the life of H.R.H the Prince of Wales. On stage a variety bill was headed by Layton & Johnson. A Wurlitzer 2Manual/8Ranks organ had been installed and was opened by organist Leslie James.

In February 1929, PCT were taken over by the Gaumont British Theatres chain. On 8th July 1929, the Hippodrome Theatre screened its first sound picture;"The Singing Fool" starring Al Jolson. Suffering only minor damage during World War II, it was re-named Gaumont on 16th February 1948.

The Wurlitzer organ became unused after CinemaScope was installed in the mid-1950’s, and this also ended use of the stage. The Gaumont was closed by the Rank Organisation on 16th January 1971 with Robert Stevens in "The Private Life of Sherlock Holmes".

The Gaumont building was demolished in February 1973, and an office block named Barrasford House was built on the site. In recent years part of the building became a nightclub named Mode, then Halo, which was closed on 30th December 2009.

What a building!! It should have been heritage listed and saved. It looks like a department store with its 5 floors(6th floor in the top front corner?).

I visited this cinema in about 1963. It had obviously been converted from a variety theatre. It was almost full and I got a seat as I was on my own. The projection room must have been at the back of the “Gods” where the “limes” used to be; the room would have already been fireproof. I was sitting in the circle and the screen was obviously leaning backwards, so the view of it from the stalls must have been poor. There were acoustic tiles on the back wall of the circle, presumably to absorb reflected sound. I was most impressed with the many boxes on the side walls. I tried to glimpse them through the cracks in the doorways opposite when I left. Sadly, I never saw it again, as it was demolished after the Odeon was split into two auditoria. It was a very sad loss of a fine auditorium. I have never found any photographic records of how it looked.