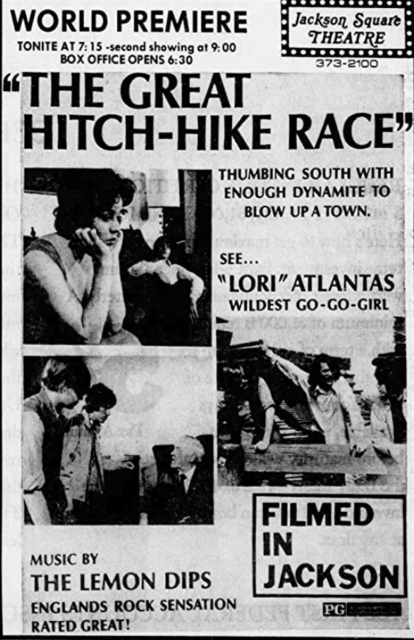 Jackson Square Theater was opened by Atco on April 24, 1970 with 520 seats in the Jackson Square Shopping Center. Sometime during the 1980’s following a huge decline in the shopping center itself, the cinema closed and was converted into a church. The same church, Cornerstone Church, operated in the building until 2005, when the church vacated and the theater, along with majority of the shopping center, was boarded up soon after.

In 2010, the Jackson Square Shopping Center was sold and is undergoing extensive renovations. The lobby is still intact equipped with movie poster marquees, concession stand, etc. The original sloped floor in the auditorium still slopes, however, the church built a false (wooden) floor which is expected to be removed to allow for the original slope. Jackson Square management use the old theater for community center, town hall meetings, live entertainment etc. By 2016 it had reverted back to use as a church.

Is this the same as the DeVille Cinema Theatre, which I’m sure was in that area, or am I mixed up?

No, the Jackson Square and the DeVille Cinema were built at about the same time (the DeVille first) and were about the same size, but they were not the same theatre. The Jackson Square was off Interstate 55 south of downtown Jackson while the DeVille was off Interstate 55 north of downtown Jackson. (I’m surprised the DeVille doesn’t have its own page on this site.) Both were considered “luxury” theatres at the time they were built. The Jackson Square had a large, wide curved screen which I think was described as Ultravision. It was fully draped and had comfortable rocking chair seats. The auditorium color scheme was a kind of burnt orange color. (The theatre was also handy to a great Howard Johnson’s where I always tried to have a clam roll before or after the movie!)

ABC Mid-South Theatres which operated the DeVille and Paramount theaters bought this theatre from Alco about the time the Paramount closed. They operated it a few more years and closed it in the early 80’s. Since Jackson was a one-run town at the time, I remember seeing THEY SHOOT HORSES DON’T THEY, EARTHQUAKE (in Senseround), WHAT’S UP DOC, and NEVER GIVE AN INCH. They tried to show Disney films but the family trade would not go that far south, the same with Ellis Isle Twin. What I hated about the theatre was they did not have a popper, but bought pre-popped popcorn and heated it. But it did have a great presentation and a huge screen.

I’ve recently started restoring the Jackson Square Theater. I started May 2010 restoring the Jackson Square Shopping Center which had been abandoned for many years. I’ve decided to restore the theater and operate it myself for performing arts, music/bands, classic films, second run films (when I can get them) and kids matinees. I’ve recently restored electricity in the concession stand, restrooms, and lobby and now working to restore electricity in the auditorium. Since the theater was home to Cornerstone Church for many years, the floor is now built up and no longer sloped. Since the floor is straight, I will do more or less a dinner theater concept. If anyone has any questions call the Jackson Square Shopping Center office and speak directly with me, Kenneth Johnson, 601-372-7157