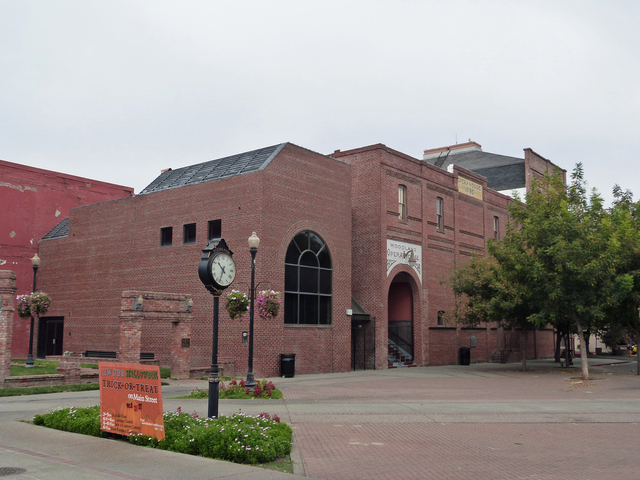 The Woodland Opera House was opened on June 15, 1896 with a play performed by the Hodges Company. It was boarded up from 1913 to 1971– for 58 years! Evidently the closure stemmed from a personal injury lawsuit.

The Yolo County Historical Society purchased the building in 1971 but restoration did not begin until 1981 after the Society gave it to the state of California in 1980. It reopened in 1989 after a seven-year $2 million restoration.

Local historian David Wilkinson, writing in the Daily Democrat in 2007, said sometimes event movies that were too large for the local nickelodeons played here. Archives of the Woodland Daily Democrat show that one notable silent film was shown at the opera house. “Camille” starring Sarah Bernhardt, played here on May 16 and 17, 1912.

The opera house currently stages productions through its modern computerized lighting and sound system. The opera house is a California state landmark and was added to the National Register of Historic Places in 1971.

The Woodland Opera House is listed in the 1897-98 edition of the Julius Cahn Official Theatrical Guide. A.M. Elston was Mgr. The seating capacity was given as 707. Ticket prices ranged from 25 cents to $1. The theater was on the ground floor and had both gas and electric illumination. The proscenium opening was 25 feet square, and the stage was 30 feet deep. There were 6 members of the house orchestra. Hotels for show folk were the Julian, the Byrnes, and the Capitol. Railroad was the Southern Pacific. The 1897 population of Woodland was 5,000. There were 3 newspapers, all weeklies.

The new Woodland Opera House opened with its first show on June 15, 1896 – a live play by the Hodges Company.