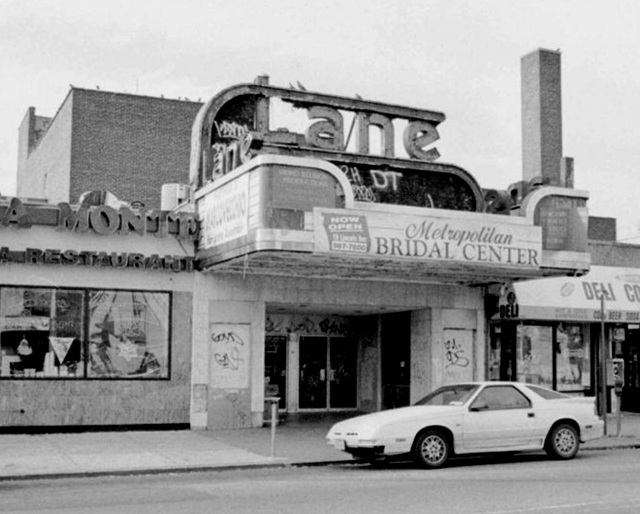 Located in the New Dorp district of Staten Island. Charles, Elias and Lewis Moses were the original owners of the theatre when it screened Deanna Durbin in "100 Men and a Girl" at its opening on February 10, 1938. The second feature in the opening program was "Hideaway." The theatre’s "homey" atmosphere boasted a mere 600 seats and cost about $100,000.00 to build.

It offered the most modern RCA sound system of the time and was cooled by refrigeration. A spaghetti-eating contest was held at the theatre and in 1942, a bed making contest was offered to open the film "Bedtime Story." By 1950 it was operated by Liggett-Florin Booking Service.

It was remodeled in 1977 and the seats dwindled to 550. The Lane Theater closed as a movie theatre on February 22, 1990 with Charlie Sheen in “Courage Mountain” & Jane Fonda in “Stanley & Iris”. In 1998, several concerts were given there. "The EleMent" nightclub opened and eventually closed in June 2001 due to drug related problems with the club crowds.

The "Lane" name can still be seen above the marquee. The name "EleMent" is still shown on the marquee.

The ceiling of the auditorium has a galactic motif. The interior has been Landmarked since November 1988.

In March 2012 it become the Crossroads Church.

How does thr signage outside look marquee etc? Uncle Vinnie had put tables an chairs in the orchestra level and a small stage is that the same?

The marquee is the same except uncle vinnies sign has been removed. Any furniture had been temporarily removed from the Orchestra to store storm relief supplies. Large tables were st up in the lobby to allow victims to choose from the supplies.The balcony had all new seats.The small stage is still there.

Thanks for that info, having cut my teeth in the business at that theatre working for Moses in the 50s it means a great deal to me to see the building survive in some capacity or another

I agree. The Empire has also been restored as a church , from the looks of the renovated facade.

Ah yes the good ole Empire; in the newspaper ads they used to call it the theatre with the perfect sound what ever that meant :) I wonder what the Liberty site is now?

It has been a church for some time now.

I remember being about five years old and seeing King Kong in this theater back in early 1977. Great memories seeing my first horror film on the big screen. Remember the lobby having a poster of Kong right after Christmas and they had the ape holding a candy cane and wearing a Christmas hat. Thanks again MattGlynn for reminding me of this theater.

Latest thing on the Lane is the “New Dorp Lane Merchants Group”. An LDC is being formed to address local issues like the muni-meters.

The Lane Theater has been our Church home since March of 2012. If you’re local, we invite you to come check out the theater in person.

You can also see some current images of the Lane Theater on our website, www.crossroadsny.org

Please update, theatre closed for showing movies on February 22, 1990 with Courage Mountain and Stanley and Iris