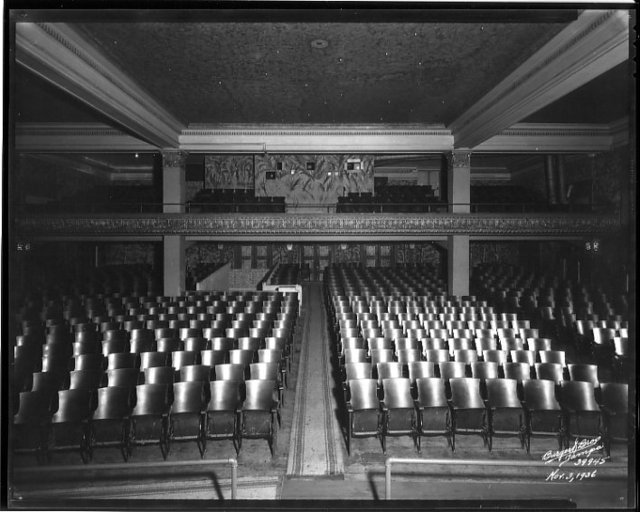 The Broadway Theatre was one of three Ybor City, Tampa, theatres that entertained the locals for years.

The theatre was located on the second floor of the L'Unione Italiana Building (The Italian Club) in the heart of E. 7th Avenue at 18th Street (today Angel Oliva Senior Street). The auditorium had a small balcony and seated approximately 700 patrons. L'Unione Italiana was a mutual health aid and social society for Ybor City’s Italian residents.

The large three-story building was completed in 1918 and housed a large dance hall, a cantina (bar), a theatre, a library, a bowling alley, and several offices and recreational rooms. In the early years operas, plays, and musicals were performed on the theatre’s stage.

The theatre officially became a movie house on November 24, 1935. The doors opened at 2:00 PM with the opening feature, "Here Comes The Navy" with James Cagney and Pat O'Brien. Admission for adults was 15 cents. Children’s admission was not advertised. Based on the various ads through the years, the standard daily fare were double features and serials. I recall seeing ads for "Gone With The Wind" when the film played at least three different times in the 1940’s.

My mother recalled seeing movies here several times in the 1930’s and 1940’s. She especially remembers the westerns. Today very few people will remember the Broadway Theatre since it was only in existence for about 18 years. The former residents of Ybor City who patronized it and those closely associated with the building are probably the only ones able to recall today that the second floor was once a movie theatre.

The newspaper advertisements ceased to appear after December 10, 1953. If this was in fact the final day of operation the last features shown were, "Starlift" with Doris Day and "Grand Ole Opry." The theatre remained closed until the early-1990’s when both the building and theatre received extensive renovation and remodeling.

I was finally able to see the auditorium around 1993 when I visited the newly reopened building. All seating had been removed and a new shiny wooden floor had been put down. The walls and ceiling were cleaned and repainted and the old auditorium now looked brand new and very attractive. The projection booth had been removed although a very faint outline of where the walls and roof had stood are still slightly visible.

The tall expansive side windows long covered when the theatre was in operation are now uncovered, and a tremendous amount of light now shines in giving an outdoorsy look to the former auditorium. The space is now utilized for receptions, weddings, ceremonies, lectures, meetings, and dances.

Thanks for adding this one, Nick. I had no idea there was a movie theater up there. I have a picture of the exterior that I’ll upload soon.

thanks Nick.you know I would love to have those one-sheets!

Here is a picture of the Italian Club/Broadway Theater, as seen in May 2010.