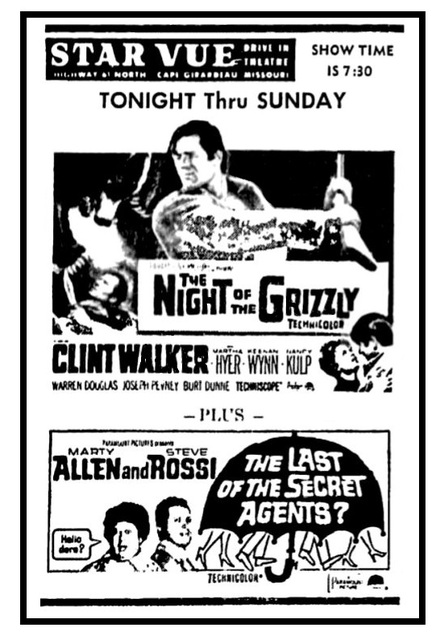 The Star-Vue Drive-In opened on May 26, 1954, featuring the 1954 western “Jubilee Trail” with Vera Ralston, Joan Leslie and Forrest Tucker. Star-Vue Drive-In was built and operated by Cape Drive-In Inc. which was a partnership of Carl Milne, Howard Bates and William Hipes. Eventually Martin Buchanan would join the partnership. They also built the Cape Drive-In in 1949. The parking ramp had a car capacity for 750 cars with a pull-off space located off Kings Highway for 250 cars going to the entrance. A stage measuring 14 by 42 feet was used for entertainment before the shows and for special occasions, such as for sunrise religious services and musical groups.

The screen tower was designed by The Timber Structures Corp. of Portland, OR. The screen was 44 feet in height and 86 feet in width. The tower, on which it was located on, was 64 feet high, and there was space for 30 rooms. Five rooms on the first floor were used as office space. The screen had a double curvature that put all sections of it equidistant from the projector, giving perfect focus. It was noted that on the giant new screen it gave the movies an illusion of depth near that of 3D pictures. The structural work on the tower itself alone cost $50,000. In April of 1954, 1956 and 1957, the Lutheran Churches sponsored Easter sunrise services at the Star-Vue Drive-In on U.S.61 north of Cape Girardeau and also at the Park View Drive-In in Jackson, MO.

Bloomer Amusement Co. from Belleville, IL, bought the Cape Drive-In and the Star-Vue Drive-In on May 16, 1957, from Cape Drive-In Inc. and took over the management of both. In November 1957, Bloomer closed the Cape Drive-In for good. In May of 1958, Bloomer completely updated the Star-Vue Drive-In. This renovation included repainting the screen tower with a new metallic paint, regrading the parking ramp, an upgrade of the sound system and the projectors with new sound heads, new projector lenses, remodeling the concession stand, and adding self-cafeteria equipment. Additionally new playground equipment was installed for the kids.

In January of 1973, Kerasotes Theatres bought the Star-Vue Drive-In. They finally closed it in September of 1983. The drive-in was demolished. On April 16, 1984, the property was purchased by Narvol A. Randol Jr., who said “the property was acquired for long-range investment, but at present has no plans for the development”. The Fountainbleau Lodge, which is an assisted living facility was built in November 1986, is located on the site of the old Star-Vue Drive-In.

There is quite a bit of information about the Star Vue with pictures here: View link