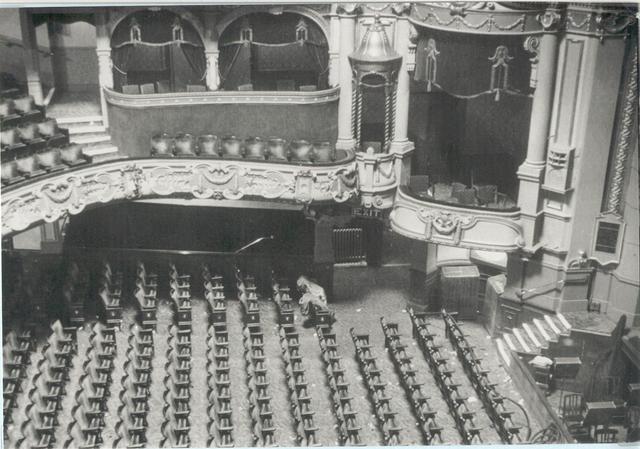 Located in the inner north London suburb of Finsbury Park, at the corner of St. Thomas’s Road and Prah Road. The Finsbury Park Empire Theatre was opened on 5th September 1910 with a variety bill which included opera singer Fanny Moody and concert singer Charles Manners. It was the 33rd variety theatre in the Moss Empires Theatres chain, and it was the 69th variety theatre to be opened in London.

The facade was in a similar design to Frank Matcham’s 1903-built Shepherd’s Bush Empire Theatre in the inner west London suburb of that name. There was a tower feature on the right-hand side of Finsbury Park, where at Shepherd’s Bush it was on the left-hand side. Inside the Finsbury Park Empire Theatre, seating was provided in orchestra, dress circle, balcony and gallery levels, with boxes located on each side of the proscenium. The proscenium opening was 40 feet wide and the stage was 30 feet deep and 50 feet wide.

The Finsbury Park Empire Theatre was 2nd in line to Moss Empires number 1 theatre, the London Palladium Theatre, and shows came direct from the London Palladium to Finsbury Park before setting off on their nationwide tour of other Moss Empire theatres. Films were screened as part of the variety programme from the early days, and during World War I and into the 1920’s, a newsreel film was screened as part of the programme.

The final show was on 7th May 1960, when a variety bill featuring the Lana Sisters (one of them was Dusty Springfield), Chas McDevitt & Shirley Douglas and topping the bill was pop star Emile Ford & the Checkmates singing his number 1 hit "What Do You Want to Make Those Eyes at Me For?“, was almost the last song to be sung in the theatre. The song dated from 1911, and had first been sung there by Rosalie Jacobi in 1914, in the Empire’s first pantomime "Babes in the Wood".

The closed Finsbury Park Empire Theatre came back to life briefly in early-1961, when the British musical film starring Cliff Richard; "The Young Ones" had several important scenes filmed on location inside and outside the theatre. After this, the seating was removed and it became a scenery store for the Stoll Moss Empire Theatres chain, with the stage used for a short while as a rehearsal space. The Finsbury Park Empire Theatre was purchased by Islington Council under a Compulsory Purchase Order on 17th July 1964, and was demolished in April 1965. A block of flats named Vaudeville Court was built on the site.

I’ve just spent an entire morning wading through these endless stories and pictures all loaded with fascinating facts and with such consummate detail. I’m so glad I was able to be an audience member at just a few Vaudeville programmes which came to the old Empire/Gaumont in Southampton. They’re right you know…“Those were the days”… gone but not forgotten.