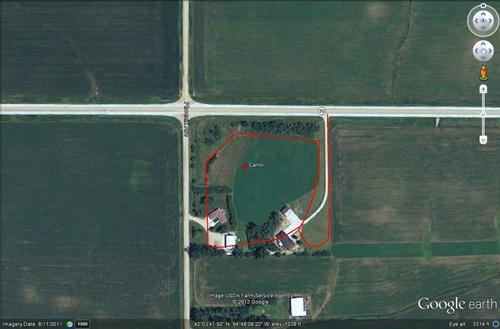 This was the second Carroll Drive-In to open in Carroll, IA. (the first was located north of town on US-71 and opened in 1948 and has its own page on Cinema Treasures).

This second Carroll Drive-In was located on US-30 to the east of Carroll, IA. The Carroll Drive-In was opened July 4, 1953 by Pioneer Theatre Corp. In the 1950’s it was running Gary Cooper movies by 1976 "The Groove Tube" and "Monty Python and the Holy Grail" were showing on a double feature. It was closed around 1979.

At the SE corner of US30 and Phoenix Ave, GE 1990 imagery shows a drive in at this site. Out East of town.

The Carroll Drive-In was last operated by Fridley Theatres.

Google maps does map to US 30 & Phoenix Ave.

Carroll Drive-In Theatre “#2” was architected by Associated Design Inc. of Minneapolis. It opened with “Small Town Girl” on July 4, 1953. All 500 spaces were in use in the drive-in lot and liked the improved 52 x 40 screen. The water-cooled long throw projection system allowed for the concession and projection area to be at the rear of the theater freeing the center for prime parking spots.

The Pioneer group of theatres in Carroll would become part of W.C. Arts' Carroll Theatre Company. On July 1, 1970, Carroll Theatre Corporation sold its theaters including the drive-in to Fridley Theatre Circuit. The Carroll Drive-In would get to its 25th anniversary as a long-time staple of the community but would be discontinued as the home video era was beginning.

The original drive-in was located at 18657 U.S. 71. Currently, a business is on the property with no traces of the old drive-in remaining. http://tinyurl.com/py7lvdf

Well, I don’t know about getting “mixed up”.

Based on the comments by dallasmovietheaters and the 1950 aerial photo of the town, it’s clear that a drive-in was located at 18657 U.S. 71 at that time. That drive-in disappears in later aerial photos and a business is in its place.

The second drive-in shows up east of town afterwards at roughly 2500 US 30.

So, perhaps for true clarity sake I suppose there could be two separate entries. However, if the first one only existed for a few years and was essentially relocated, I would not object to just keeping this to one page.