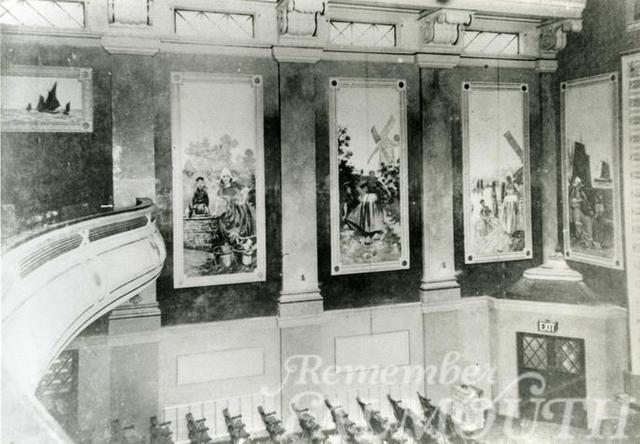 The Grand Theatre was opened in 1928 as a live theatre. With the coming of ‘talkies’ it soon became a full time cinema in 1929, although some live performances were part of the programming in the summer months. The auditorium was decorated with a series of large painted panels which depicted various scenes of Dutch country life. It had a 26 feet deep stage and six dressing rooms.

In January 1936, it was taken over by the Union Cinemas chain, and in October 1937, they were taken over by the Associated British Cinemas(ABC) chain. It was re-named ABC in 1961, and was closed on 21st September 1968, being converted into a bingo club.

Re-opened as the ABC cinema on 4th May 1970, it was taken over by an independent operator on 18th March 1976, and was re-named Grand Theatre, with a programme of films and live shows. The Grand Theatre was closed on 31st January 1986, and was demolished, apart from the facade.

A vintage photograph of the entrance to the ABC in 1972:
View link

My photographs (which, despite the date in the camera data, were taken in June 2013) show the building currently on the site and also the Royal Coat of Arms, most likely displayed above the theatre’s proscenium, which is now attached to the outside of the rear of the building. (It can just be seen, on the ‘blank’ rear side wall.)

Thanks David. I assumed that the building now occupied by HSBC was part of the cinema (columns). But I can’t picture it, so I assume from your information that this was built post-demolition and made to look much older than it actually is.

I often pondered about the coat of arms, on my way back into town from Jacob’s Ladder Inn!

I can’t work out where the facade is.

In Fact the Coat of Arms now on the side of the HSBC Bank was on the front of what was called The Royal Hotel. The whole site was built as a Hotel with a Coaching Yard at the side and to its rear. The Hotel is now the Bank and the site of the Grand Theatre would have been this Coach Yard to the side and at the Back of the Bank. The Theatre had a covered way now Moss Bros and then marble steps leading to its entrance which woyuld have been further back partly in the Fit Pit car park.

Hi. I’m in the process of putting together an exhibition about the history of cinemas in Falmouth to be shown at The Poly in November. This will include images from our archive such as the one above. You can view some of our images on our website http://rememberfalmouth.co.uk/

At the moment I’m carrying out research into the 7 cinemas which have operated in the town over the years. If you have any info or photos to share I’d love to hear from you.

In c1957 I was watching War and Peace here when there was a strange puffing sound. A staff member walked through the auditorium spraying with a disinfectant Flit gun! A unique cinematic experience.

The Cinema was part of The Royal Hotel, main part now being HSBC. The Cinema space being to the right if you were looking at the building. As for the coat of arms on HSBC side wall, it’s the coat of arms of the Original Royal Hotel. I was looking for images of the cinema and the hotel as my great great grand father owned all the Horse and Carriages in Falmouth, and the family owned the stables beneath The Royal Hotel, my grand mother told my mum that they were where the grand was. I at first thought that it was the name of the hotel, but have since learned that it’s not but obviously the cinema she was talking about lol.. I also learned tonight it was the foremost Coaching Inn in Falmouth at the time. So all gels… And prior to it being called The Royal Hotel it was Called Wynn’s Hotel, which was the hotel Lord Byron stayed at before leaving on a ship bound for Lisbon I think, also if anyone is interested there’s a poem of his in link below that was written At Wynn’s Hotel, talking about is pending voyage and the doom he felt. Anyway thought I’d fill you in.

ps also have a couple pictures if anyone wants to see them let me know.