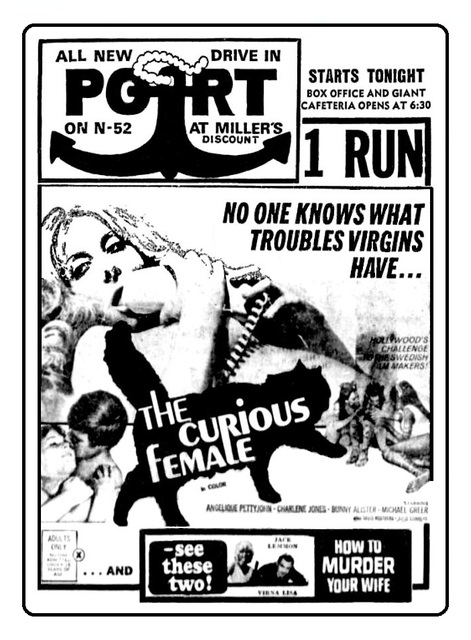 The opening feature was “The Curious Female” with Angelique Pettyjohn, Bunny Allister and Charlene Jones. The second feature was from 1965, “How to Murder Your Wife” with Jack Lemmon, Virna Lisi and Terry Thomas. It had a parking ramp that would hold 800 cars. The Port Drive-In had show mostly “R” Rated and “XXX” rated movies, with a few PG Rated movies. It advertised along with the Fox Theatre starting in the mid-1970’s. I am not certain, but possibly it was owned by Piedmont Theatres of Charlotte, SC. It finally closed in August 1986, and was redeveloped as the Liberty Mall Shopping Centre.

If the above picture links are correct, then the 5300 River Ave address belongs to the Gateway Drive-In. The Port Drive-In is at 4801 River Ave.

The shopping center described above would be where the Gateway once stood then.

The Gateway needs an entry.

The Gateway now has a page here on CT.

This photo from the Gateway’s gallery page at Drive-ins.com shows the locational relationship of the Port Drive-in and the Gateway Drive-in.

That is all picture is wrong..The Port is at the top of the picture and the North 52 is at the bottom.