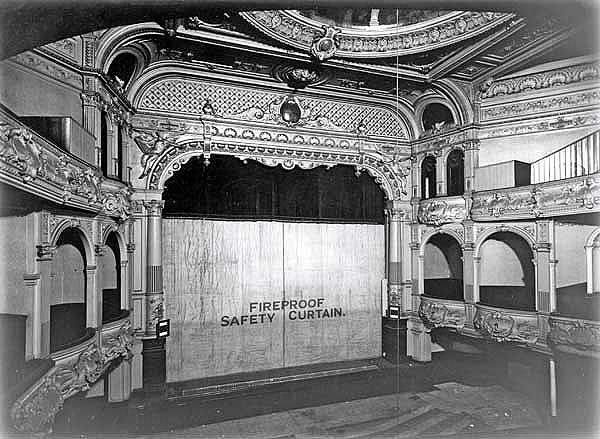 Her Majesty’s Theatre was opened in March 1900 with "The Belle of New York". The building was owned by the Walsall Theatre Company, and it dominated the top of Town End Bank (today re-named St. Paul’s Street and Park Street). It was a magnificent structure, with a huge dome that had a smaller open dome on top. There were other smaller domes and minaret type features. The interior was also very ornate. Her Majesty’s Theatre staged a mix of plays, musicals and variety performances. In 1905 the Moss Empires Ltd. theatre chain took over the progamming of the theatre and from April 1905 during variety programmes it screened films as part of the bill.

In 1933, it was converted into a full time cinema, and it was taken over by the Associated British Cinemas(ABC) chain on 31st March 1936. It was closed on 12th June 1937, and was immediately demolished.

The new ABC Savoy Cinema was built on the site and opened on 3rd October 1938. It later became the ABC, and finally Cannon before being demolished in 1995.

A drawing of Her Majesty’s Theatre, Walsall: View link

Too bad “ ON HER MAJESTY’S SECRET SERVICE” never had a chance to play there.

The ABC Savoys Original Name was going to be “The New Her Majesty’s Theatre” But being a super Modern Theatre decided on “The Savoy” The Company that built the Theatre was “The Walsall Theatre Company” The Managing Director was W. Westwood. with his son and George Blakemore as Directors Pictures of these can be seen on The Palace cinema Walsall, which was one of their Theatres

Error Moss Empire never operated the Theatre. They just presented Shows there for a percentage fee. Nothing else. The WALSALL THEATRE COMPANY still had a control on the 4 theatres until 1956 when ABC finally paid out. Remember Associated British Cinemas meant what it said on the label It was a large number of Companies.