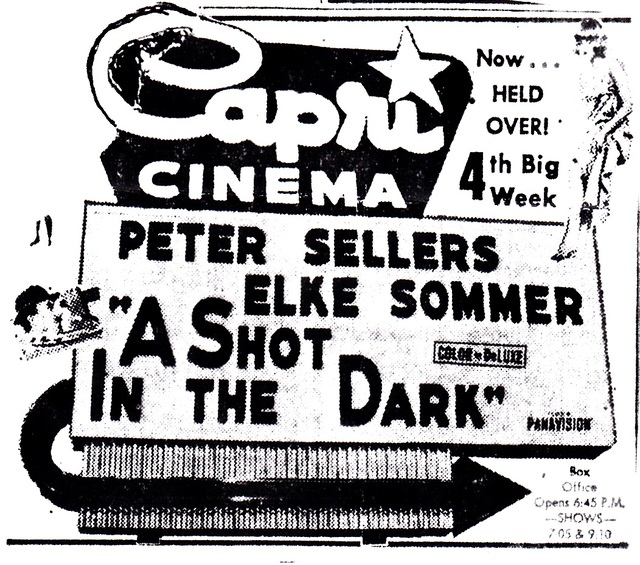 The Pike Theatre was Knoxville’s premier theatre for foreign classics and other alternative fare.

It opened on June 5, 1946 with 800 seats, and was a big plain concrete block box, which is kind of unusual for theatres specializing in such fare.

The Pike Theatre was located in affluent West Knoxville, and a ten minute bus ride away from the campus of the University of Tennessee. I first discovered the postwar international greats such as Bergman, Fellini, and Kurosawa there as a high school student in the 1950’s.

A tall, elegantly dressed gentleman was often present and I assumed he was the owner. We often chatted and after my third Bergman–“The Magician” (in 1959)–I remarked on how meager his audiences often were. "You have to build up an audience for Bergman," he said.

He often complained that the major distributors were colluding against him. Around 1960, in fact, he brought suit and eventually won a settlement and desist order against them. I left Knoxville shortly after that and never heard if the decision held or went into appeal.

The Tower Theatre, on North Broadway, was under the same ownership and was the Pike’s architectural twin. Both the Pike Theatre and Tower Theatre were listed in Film Daily Yearbook 1963 as "art theatres." The Pike Theatre was renamed Capri Theatre on May 16, 1963, having been taken over by the Simpson Theatres chain. On November 23, 1967 the Capri 70 Cinerama Theatre was built and opened adjacent to the Capri Theatre, and it basically operated as a twin theatre operation.

An Ace Hardware outlet now occupies the former site of the Pike Theatre.

I recall seeing handprints and signatures outside on this theater’s sidewalk – Oscar-winners Patricia Neal and Cliff Robertson, amongst others. Last I saw, these were moved over to the former Terrace theater.

The first handprints were from Ingrid Bergman from the premiere of “A Walk in The Spring Rain” in April 1970. I have posted a picture of the event in the photos section. I have also posted additional photos on the Capri Cinema III & IV thread since technically that was the former Capri-70 before it was twined.

I’m wondering why the Capri I & II’s style is listed as Rustic. Did it have some sort of rustic features when it was the Pike?

Joe, I have no idea why it would be put in the rustic category. When the Pike was built in 1946, it was the typical post war design. There was a story in Boxoffice about the innovative use of precast concrete slaps that were used for the side and rear walls. They are currently re-working the Boxoffice Vault web page, so I am unable to post a link.

I found the article about the construction of the Pike here in “The Showman’s Trade Review”. It is not as long as the one in “Boxoffice”, but it is still informative.

The article tntim linked to says that the Pike Theatre was designed by the Knoxville architectural and engineering firm Fred Manley Associates.