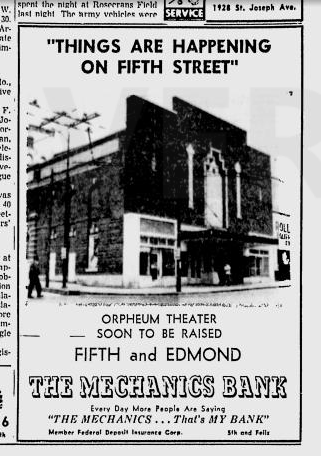 The grand old Orpheum Theatre in St. Joseph, MO. was the kind of downtown theatre we all miss. It was built in 1912 and operated by Saxe Amusements. On January 23, 1933 it was severely damaged in a fire. It was rebuilt and reopened by Dubinsky Brothers on October 14, 1933. It was later operated by Durwood Theatres Inc. and showed "The African Queen" proudly. It was closed on 11th May 1957 and was demolished in 1958 to make way for a bank parking lot.

Was on the Northeast corner of Edmund and 5th.

Can always use more info and more photos.

This house opened as Saxe’s Orpheum Theatre. It was featured in the February 24, 1912, issue of The Moving Picture World. The article said that prior to its conversion into a movie theater the building had housed a beer garden operated by the Schlitz company. The theater opened on December 15, 1911.

Last date opened Saturday 11May1957. On Friday 4April 1958 the Orpheum Theater was sold the article in the paper said it will not be used as a Theater again. it was scene of half-century of stage productions,silent movies + talking movies. The Orpheum was gutted by fire on Jan23 1933 and was rebuilt and reopened in October same year. The Orpheum was raised on Thursday 15May1958 according to an add in the St Joe Newspress taken out by a local bank at the time.

An old postcard view of the Orpheum: View link

The January 24, 1933, issue of The Film Daily ran this report of a fire at the Rialto Theatre:

“St. Joseph, Mo. — Nate Block’s Orpheum, operated by O. G. Amusement, was destroyed by fire yesterday with loss estimated at $50,000. Police are investigating. The house was picketed several months ago, due to trouble with operators.”The March 30 issue reported that the theater would be rebuilt:

“St. Joseph, Mo. — The Orpheum, destroyed by fire recently, will be rebuilt into a 1,200-seat house. Nate Block is the owner.”According to St. Joseph Memory Lane, the rebuilt Orpheum reopened on October 14, 1933. The Orpheum was sold in 1958 to Mechanics Bank, which had the building demolished to make way for a parking lot.

The beautiful Saxes Orpheum Theater was once one of the gems of downtown. It was built in 1912 on the site where the Schlitz Cafe and a lot used for sideshows once stood, The theater was brightly lit at night. The Orpheum Theater was located on the northeast corner of 5th & Edmond. On January 23, 1933 a $35,000 fire severely damaged the theater along with St Joseph Shoe Repair, 505 Edmond, which also shared the structure. The fire was believed to have been vandalism by disgruntled employees. The theater was rebuilt and reopened in October 1933 The new theater was not as extravagant as the original theater. On April 4, 1958, the theater was sold to the Mechanics Bank. On May 15, 1958, it was announced that the theater would be razed. The building is now gone and is currently a parking lot.