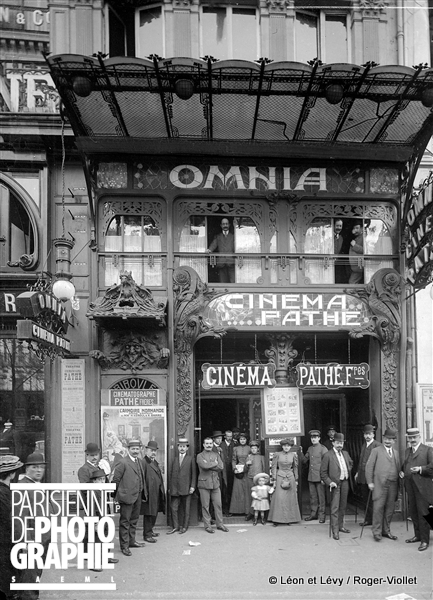 The Omnia Pathe Cinema was one of the earliest cinemas in Paris, opening on 14th December 1906 with 250 seats. In 1912 it was remodeled to the plans of architect Auguste Marie Waser and a balcony was added which increased the seating capacity to 587.

It operated under several names over the years, and in the early-1970’s it was twinned. In 1982 it was tripled as the Arcades. It closed on 8th September 1987.

A vintage 1906 photograph of the Omnia Pathe Cinema:
View link

The Omnia Pathe Cinema was one of the earliest cinemas in Paris, opening on 14th December 1906. In the 30ths it became a newsreel cinema, seating 700 and first named Cinéphone-Petit Parisien, then “Cinéphone-Montmartre”. In 1946 it returns to showing regular movies, named California with 590 seats. The theatre starts a new chapter after transformations in 1959 returning to the name Omnia, equipped for 70mm movies and seating 680. In the 70ths the theatre is twinned and named Omnia Boulevards, before becoming an X-rated cinema in 1979. After the last transformation in 1982 into 3 screens, it’s named Arcades and shows regular movies once more, but closes only 5 years later in 1987. (The number of seats was 587: 299 + 189 + 99, not 250!/ and 3 screens instead of 1)