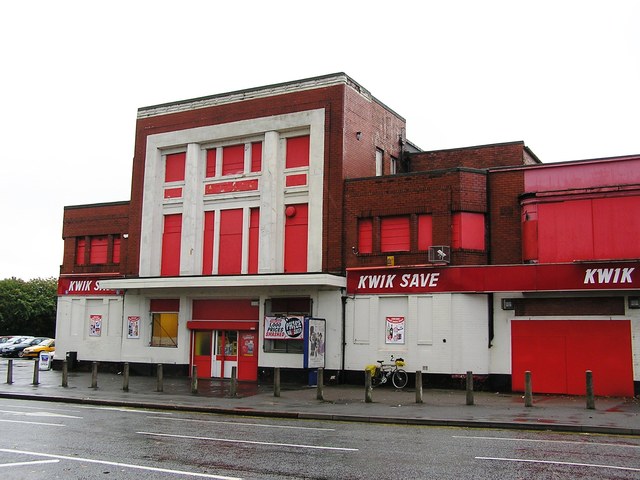 Located to the north of Bolton on Crompton Way, close to the junction with Tonge Moor Road. The Crompton Cinema was opened on 6th December 1934 with Alan Dinehart in "Dance Girl, Dance" and Marian Marsh in "A Man of Sentiment". It was operated by Arthur Hall of the Palladium Theatre, Blackpool. The Crompton Cinema had a 46 feet wide proscenium, and had a cafe attached.

The Crompton Cinema was closed in 1959, and was converted into a bingo club. This use continued for a while, then it became a nightclub into the late-1990’s. It was converted into a Kwik Save supermarket, but this had closed by November 2008. It has re-opened as a SMS Supermarket in April 2010.

My father worked here as a projectionist around 1949 and my mother sold tickets. They began seeing each other and after the show started my mom would sneak up to the projection booth to see my dad. After his stint in NS they were married in 1955 until my mom passed in 1996. Would love to hear if anyone knew of them working there.

During the building’s period as a night-club it was, for a time, so successful that parking became a real problem. The management duly achieved compulsory purchase of several, very attractive family homes, immediately adjacent to the left side of the building. These were then quickly burnt out and demolished, in order to lay the present car-park! Following the demise of Kwik Save, the supermarket was taken over by the Asian owned S.M.S. chain, who later adopted the, Co-op owned, Nisa Extra franchise. It was at this time that the upper, front facade, including the projection box, was removed. Finaly, ownership has now passed to Tesco’s, who now operate it under their Booker Group, off-brand,‘Family Shopper’ identity. The right-hand part of the property, once the cafe, is now a carpet store.