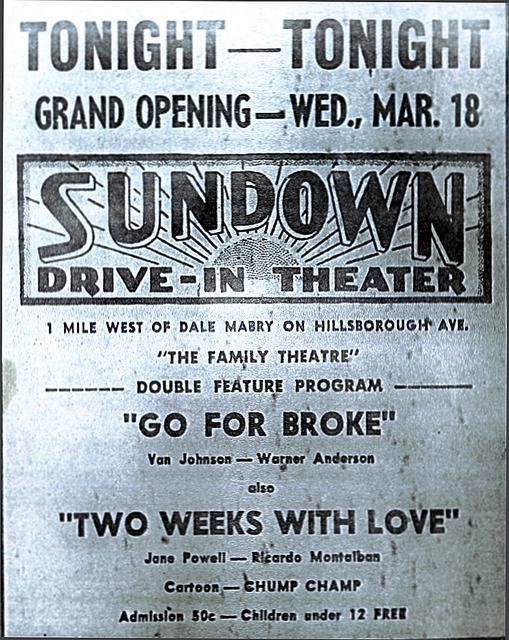 The Sundown Drive-In probably had the shortest lifespan of any drive-in in the country. Opening on March 13, 1953 and closing in August of 1954, the drive-in was in existence for a mere one year and five months. Capacity is listed as 275 cars and the owner was Bob Morales.

The rear of the screen faced Hillsborough Avenue and the lot was not far from the airport’s north and south runways on the opposite side of Hillsborough Avenue. This in fact may have been one of the reasons for the early demise of the Sundown. This plus being located far off the beaten path may have sealed it’s doom.

As late as the mid-1970s the screen and the concessions building were still standing. While driving down Hillsborough Avenue I remember seeing the rear of the rusted and tattered screen several times which was now surrounded and partly obscured by trees and overgrown bushes. On one occasion I turned down the narrow dirt road and drove towards the rear of the screen.

I could see the concessions building now nearly obliterated by weeds and tall bushes. Walking past the screen and into the lot I stopped cold. As intriguing as it was and even in broad daylight I just didn’t have the nerve to go any further fearing snakes and other creatures may be lurking within. The entire lot was almost hidden by the overgrowth and looked small in comparison to other drive-ins.

The Sundown Drive-In also played a few Spanish language films based on several ads I saw before switching back to Engish language features. The final published ad appeared on Friday, August 13, 1954. That evening’s program was advertised for Friday and Saturday although there was no published ad in Saturday’s theatre listings. A friend tells me she remembers going to the Sundown Drive-In to see "The Barefoot Mailman" with Bob Cummings. She also remembers seeing either "It Came From Outer Space" or "The Creature From The Black Lagoon" here. The Sundown Drive-In had closed long before I discovered movies and theatres so I never had a chance to see a movie here.

There was a drive-in near Buffalo, NY, that lasted for only 3 months! The Nite-Way Drive-In opened in August 1948, then closed for the winter by mid October. A January windstorm knocked down the screen, and they never reopened. This drive-in was also notable in that they advertised the availability of AM radio sound, in 1948! Did people even have radios in their cars then?

This website contains more information about the Nite-Way, I’ll check to see if it’s already been added on CT, if not then I will see to it personally.

Here is a 1969 view, courtesy of Historic Aerials.

Thanks for the link Andy! I hadn’t heard of Historic Aerials before. It took me a couple minutes to figure out how to navigate before realizing you need to input address & city. Clicking in the dots at the bottom right of image then brings it into focus. My search for a photo of the Sundown proved fruitless so this is great.

I apologize about my link above. It shows the area just north of the Sky-Vue in South Pasadena. This should show the Sundown.

Aerial from 1957. The Sundown had already been closed for 3 years:
View link

Here’s a current aerial of the property as it looks today:
View link

Golly, looks like one could be built right back SUNDOWN II ?

The Sundown Drive did not place any ads in the newspapers until June of 1953.