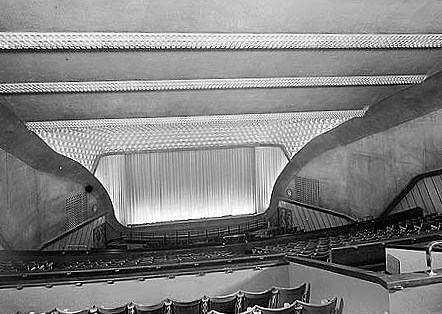 Located in Yeovil, Somerset. One of the original Odeon’s built for and operated by the Oscar Deutsch chain of Odeon Theatres Ltd. The Odeon opened on 10th May 1937 with George Formby in "Keep Your Seats Please". Although located in the town centre, the Odeon was hidden away up a narrow side street. Designed by Budge Reid working out of the Harry Weedon Partnership office, the exterior is impressive, but a little ‘boxy’. The façade is clad in cream faience tiles, and there is a large fin tower jutting out of the centre of the façade, which contained the Odeon name on top.

Inside the auditorium, seating was provided for 978 in the stalls and 602 in the circle. The interior decoration was by interior designers Mollo & Egan, and lighting was by a Holophane system over the proscenium and on splay walls beside the proscenium. This consisted of a mass of small circular dishes, which were lit by a three colour lighting system, that was changeable. There were also troughs containing concealed lighting in the ceiling, again with Holophane lighting.

The ABC was closed on Easter Sunday in April 2002, when the new 10-screen Cineworld multiplex opened in the town. The former Odeon was converted into ‘The Old Cinema Bed & Sofa Store’ which opened on 3rd January 2004 They moved out of the building in February 2015. In August 2015 it became a charity shop for St, Margaret’s Hospice and the former circle foyer was converted into a café. Externally, the building remains as built in 1937, though without signage. Most of the internal decoration has been retained.

A picture of the former ABC Yeovil: http://tinyurl.com/39qkhhn

A set of photographs of the Odeon Yeovil:
View link

This is a lovely ex cinema and its so nice to see that so much of the decor has been retained. If ever I get to take my coach that way Ive just got to visit this.